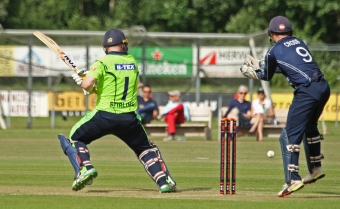 MUMBAI – The official name of the recently-announced European T20 competition - that will be played across Ireland, Scotland and the Netherlands starting August 2019 – will be known as the ‘Euro T20 Slam’.

The competition will take place from 30th August to 22nd September 2019, and similar in style to other well-known T20 leagues around the world, the T20 league will feature city-based franchise teams (six teams, two from each country).

The name was unveiled after an agreement between event managers, Woods Entertainment and GS Holding, and the three participating cricket boards - Cricket Ireland, Cricket Scotland and KNCB.

“After consultation with the cricket boards of Ireland, Scotland and Netherlands, we come to a general consensus over the name. Since the term league is used all across the world for T20 events, we wanted to add the energy factor to our tournament, hence we have decided to name it Euro T20 Slam.”

“The process wasn’t just about establishing a mere name, but rather giving the tournament an identity which both aligned it with other global domestic leagues, yet made it a distinctive and a vibrant brand.”

“It was important to us to convey our points of difference that would resonate in local markets – in Ireland, Scotland and Netherlands – where cricket is not the dominant sport in town. The touch points of geography, cricket and excitement was our goal, and we hope it will gain the necessary traction with fans.”

The tournament will involve 33 matches across all three countries, featuring a Group Stage followed by semi-finals and a final. Tournament rules will ensure that each franchise must have a minimum of nine domestic players, and up to a maximum of seven overseas players within their squads. Furthermore, the rules mandate that of the 11 players taking the field in each match, six players must be domestic players.

Further details about the Euro T20 Slam will be released in coming weeks, with an official launch in April 2019.