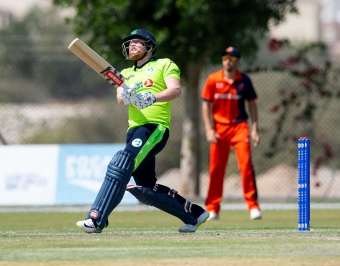 The new T20 competition will start in August 2019

DUBLIN, EDINBURGH, NIEUWEGEIN – A new European T20 cricket league has been sanctioned by Cricket Ireland to be held from 30 August to 22 September 2019, following an agreement between the boards of Cricket Ireland, Cricket Netherlands and Cricket Scotland.

Similar in style to other well-known T20 leagues around the world, the new tournament will feature city-based franchise teams (six teams, two from each country). The tournament will involve 33 matches across all three countries, featuring a Group Stage followed by semi-finals and a final.

Tournament rules will ensure that each franchise must have a minimum of nine domestic players, and up to a maximum of seven overseas players within their squads. Furthermore, the rules mandate that of the 11 players taking the field in each match, six players must be domestic players.

The tournament, developed following consultation with ICC, will be delivered under an initial 10-year agreement with event and funding partners GS Holding Inc. and Woods Entertainment, and will be broadcast in cricket markets globally. A Governing Committee comprising representatives from GS Holding Inc./Woods and the participating cricket boards will be established to oversee the tournament.

“We are very excited that what has essentially been an 18-month project in planning is across the line. The quality and competitive performances in white-ball cricket played by the three nations involved has been on full display over recent years, and we saw a joint competition as the best means of ensuring that there would be high quality cricket for the players and fans to enjoy.”

“The global rise of T20 franchise cricket is a phenomenon within our sport, and there is no secret that Ireland’s performances at this format of the game have not been where we have wanted over the last few years. That, for us, was one of the prime motivators for such a competition – to provide greater opportunities for Irish players to play top quality T20 cricket. The ability to play alongside a range of experienced international cricketers will only benefit both the established and emerging Irish talent that will be involved over the next decade.”

“It was also important for us, given our current work and investment into building the international and domestic structures required to compete successfully as a new Full Member of the ICC, that we found an event delivery and funding partner that would complement our strategic plans. In Woods and GS Holding Inc. we have some well-credentialled and experienced partners to provide this.”

“For Ireland, the current proposition is that one franchise team will be based in Dublin and another in Belfast. This promises to be an exciting venture for Irish cricket fans and we all look forward to seeing the tournament get underway in August.”

“Finally, on behalf of Cricket Ireland I would like to thank the Board and Management teams from Cricket Scotland and Cricket Netherlands on their enthusiastic and collegiate approach to supporting the development of the tournament. We look forward to our inaugural decade of top-quality domestic T20 cricket that has the potential to raise the standards and performances of our respective national sides.”

“Cricket Scotland is always looking for more fixtures against high-quality opposition to develop the talent in our national team. The proposal for a six-team European tournament featuring teams from Ireland and Netherlands, provides an excellent basis for Scottish cricket to prosper.”

“Off the back of our highest ever global T20I ranking of 11th, the tournament comes at a fantastic time for Scottish cricket. The chance to play alongside some of the best in the business will provide a great opportunity for our players to learn and develop their own skillset as we strive to achieve Full Membership and climb the ICC team rankings.”

“The league also comes at an important time of year for Scotland, with the proposed timeframe presenting an opportunity to play quality competitive cricket ahead of the ICC T20 World Cup Global Qualifier in UAE in October.”

“We are excited to bring the global phenomenon of T20 franchise cricket to Scotland, with our vision to have two city-based teams in Glasgow and Edinburgh. Not only will the tournament help develop our players and coaches, we hope the tournament will increase public perceptions of the sport as well as engage communities around our franchise teams, with the opportunity to watch top cricketers from across the globe.”

“We would like to thank GS Holding Inc. and Woods and of course the Boards of Cricket Ireland and the KNCB for working so hard to bring this exciting development to Europe.  Cricket Scotland very much looks forward to watching Scottish cricket evolve over the next 10 years.”

“We are very excited to participate in the new European T20 League which starts in August 2019. In recent months, the three cricket boards have shown that European cooperation is possible and we thank Cricket Ireland for this great initiative to put T20 cricket in Europe on the map.”

“For some time, Ireland and Scotland have been competitive opponents and we need each other to continue to perform at a high level. This new T20 league is a great opportunity for the Dutch players to gain more T20 experience at a high level and to play in a team with highly experienced international cricketers.”

“This event will certainly contribute to the development of Dutch cricket talent and further expansion of cricket in The Netherlands, some of the objectives of KNCB’s new strategic plan.”

“We look forward to beautiful summers with exciting T20 cricket across all three countries. Finally I want to thank Cricket Ireland and Cricket Scotland for mutual confidence and very pleasant cooperation.”

“It’s exciting to be able to extend our expertise to this new upcoming league. Europe does not have any cricket league, which gives us the first mover advantage and allows us to build the sport here with utmost sincerity. We are extremely thankful to Cricket Ireland and the cricket boards of Netherlands and Scotland for trusting us with this and we look forward to creating magic in Europe.”

“It has been an exercise of around 18 months for us and I must say that the way Cricket Ireland has worked towards developing every stage to come till this sanction has been extremely professional and commendable. It reinstates our belief that we have great partners to work with.”

“Unlike the other T20 leagues, this has teams representing different nations of one continent and not just cities of one nation. This widens the reach of team loyalties and helps us look deeper into unexplored cricket markets. Cricket will surely be loved here and since the format is so fast paced and energetic, we can certainly expect a blockbuster tournament.”

The benefits of the tournament go beyond the playing staff, with coaches and support staff of national sides being permitted to participate in the franchise teams as long as there is no conflicts with their national duties. The competition will furthermore provide opportunities for local umpires and match officials to be involved in the operations of the tournament.

A formal launch of the competition is expected to be held in April 2019 at which the name of the tournament and confirmation of venues will be unveiled.