May 1st 2021 by Craig Easdown | International 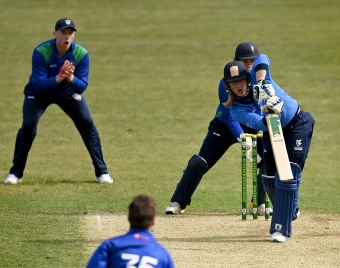 Jamie Grassi on his way to 82

DUBLIN – Titleholders Leinster Lightning have begun their title defence with a confident six-wicket win over the North West Warriors in the opening Inter-Provincial Cup match today at Pembroke Cricket Club.

Led by an innings of 82 by Player of the Match Jamie Grassi – playing in only his 2nd List A match for the provincial side – the Lightning paced their reply well on a cool first day of May chasing down the Warriors total of 204 with 15 balls to spare.

After losing Kevin O’Brien (10), Jack Tector (34) and Grassi built a 62-run second wicket partnership in 86 balls, turning over the strike regularly and offering only a few half-chances along the way. Grassi was steady throughout his innings, bringing up his half-century with a swept six off Boyd Rankin.

He was joined by George Dockrell in the 25th over and the pair took the score from 92-3 to 198-4 without fuss. Dockrell did not play the silent partner role, he seemed to come in with the single-minded notion of seeing out the win in good order. His 50* came from just 61 balls, playing forceful shots straight and square of the wicket – as well as one enormous straight-hit six from Andy McBrine.

Simi Singh – last year’s Player of the Season – fittingly hit a four to bring up the win.

For the Warriors, Craig Young was the most threatening bowler, but went wicketless with 0-24, and Graham Hume bowled a good line and length, snaring two wickets (2-39).

Earlier in the day Leinster Lightning captain Dockrell won the toss and elected to bowl first on a day which featured a little early morning dew. Players from both sides observed a minutes silence for Pembroke Cricket Club member of 73 years Cyril Irwin who sadly passed during the week.

After a sprightly start from Warriors opening pair of Stephen Doheny (29) and William Porterfield (4) with 30 from the first five overs, Lightning bowlers made a breakthrough in the sixth over – Barry McCarthy knocking back Doheny’s leg stump. Porterfield left LBW soon after, and the run rate seemed to dry up as captain Andy McBrine (38) and Stuart Thompson (18) sought to stabilise the innings.

McBrine, batting up the order at three, seemed assured but played within himself throughout, seemingly setting himself for a long innings. However, the Warriors’ defences were breached again within the space of four balls losing Thompson and Shane Getkate (1). Getkate – in his first appearance for the North West side - miscued a shot to leg and was well caught by JJ Garth at midwicket, diving forward to scoop up a rapidly dropping ball.

After McBrine fell, the two Graham’s – Kennedy and Hume – attempted to counter-attack. Kennedy looked good for 21, until he feathered an edge to Lorcan Tucker off Dockrell, but Hume continued on with an assured batting display registering 44* from 55 balls.

In the end, the Warriors couldn’t manage to find a partner to stick with Hume and the North West side was bowled out for 204 with seven balls of their innings left.

The Lightning’s six wicket win successfully kickstarts their title defence with an impressive all-round team performance, while the Warriors can take a number of positives from the day - particularly the lower order recovery, the fact that five of their top seven got starts and the bowling of Young and Hume in particular.

The Lightning return to Pembroke on Tuesday to take on the Northern Knights.