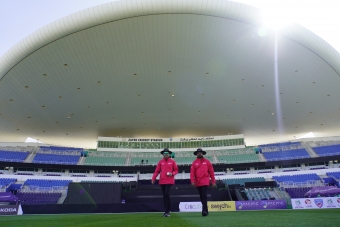 Tomorrow's ODI has been postponed

ABU DHABI - Emirates Cricket Board has advised Cricket Ireland of a further player who has tested positive for COVID-19. As a result, it has been agreed that tomorrow’s ODI will be suspended.

In a statement released today, the Emirates Cricket Board said:

“Emirates Cricket Board has confirmed that tomorrow’s match in the Sky247.net ODI Series 2021 against Ireland has been suspended. This decision, supported by Cricket Ireland, was made after a new directive was received from authorities.”

“This followed over 48 hours of self-isolation by the UAE team after four reported positive cases of Covid-19. Additionally, the directive from the authorities requires the UAE team to remain in quarantine for an extended period of time.”

“Discussions are continuing with all concerned parties, including the relevant authorities, regarding rescheduling of the remaining matches. A decision will be made and communicated once an agreement has been reached and approved.”

While disappointing for players and fans alike, Cricket Ireland thanks the Emirates Cricket Board and Abu Dhabi Cricket for their transparency and cooperation at this time, and will continue to monitor the situation over coming days. As always, the health and safety of players and support staff will remain Cricket Ireland’s priority.

We will endeavour to keep fans updated as circumstances evolve.