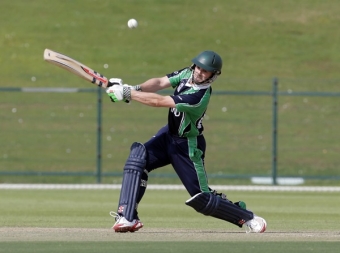 The Minister said: “This is a superb achievement by William, one which has helped Ireland remain unbeaten in the ICC World Twenty20 qualifiers.”

The Donemana cricketer, achieved the milestone in a match against the USA in the ICC World Twenty20 Qualifier in Abu Dhabi.

The Minster continued: “Cricket is a sport which is growing in Ireland as the team continue to assert themselves against the established sides around the globe. William’s century is the latest landmark on that journey, and hopefully a good omen as Ireland aim to qualify for next year’s ICC World Twenty20.”

This is Ireland’s fourth win from four matches which leaves them the only side with 100% record in either of the qualifying groups.  They will play again tomorrow against Italy.