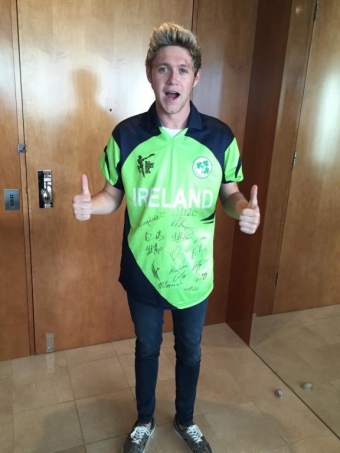 One Direction star Niall Horan has joined the myriad of celebrities who are #BackingGreen ahead of Ireland’s eagerly anticipated clash with India at Hamilton tomorrow.

Members of the Ireland squad bumped into the Mullingar native while preparing for the World Cup at their pre-tournament camp in Coogee in early February.

The boyband singer has been keeping a close eye on Ireland’s progress at the showpiece event and showed his support for the Boys in Green by sporting the new O’Neills World Cup shirt signed by the entire squad, as One Direction continue their world tour.

Horan is just one of many celebrities who have joined the chorus of international supporters that have helped the hashtag #BackingGreen become one of the top trends on Twitter. Just some of those who are also backing Ireland in the World Cup include:

Really like Ireland's spirit to prove their worth in #CricketWorldCup Wish them luck for the tournament http://t.co/K3MEW8HcSV

Ireland beat Zimbabwe in the cricket is there no sport we don't eventually dominate ! # Sports mad .

Yesssssss!!!!! ireland win, beating Zimbabwe with only 5 runs to spare.

The way this weekend has been going for the Irish do the cricketers even have to tog out tonight? #backinggreen

Ireland fans will have an opportunity to see the Boys in Green in action on home soil after the World Cup when they take on England at Malahide on Friday May 8th - Get your tickets before it’s too late!! Click Here To Buy