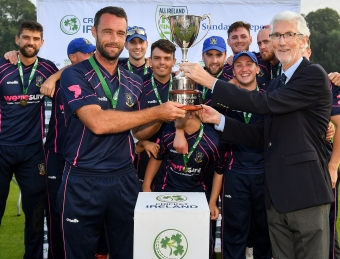 Jones, 37, played 34 times for Ireland between 2009 and 2012, and was last year appointed Head Coach of Leinster Lightning. He replaces the outgoing selector Albert van der Merwe.

“I am honoured to be asked to come onto the National Selection Panel and I’m looking forward to playing my part in supporting, challenging and promoting our current/ next crop of players in discussions round the selection table.”

“It’s an exciting period at the moment, and I believe that we are now starting to see the benefits of the transition period we have been going through, with the likes of Lorcan Tucker, Josh Little, Harry Tector, Mark Adair, Gareth Delany, James McCollum and David Delany all showcasing their promise over the past 12 months or so with either match contributing and or winning performances for Ireland.”

“However, these younger players wouldn’t have been able to flourish without the experienced backbone of the squad which is where a majority of our consistent performers are still positioned.  The overall mix of experience and youth I believe is starting to bear fruit in our performances and hopefully this will continue to develop over the next 12-18 months as we look to provide further opportunities for our players.” Does having played at the highest level of the game help in this new role?

“I feel it will help me to appreciate the challenges that players face, and understand the pressures attached to playing at the highest level. We often see players struggle to adapt to the intensity of international cricket for a number of reasons, so as a selector I believe it’s important that we understand as much as we can from a player’s perspective while also remaining clear and true to the performance expectations of a player at senior men’s International level.”

“I believe that if I can establish strong and honest relationships with people in life then a majority of challenges either disappear or they can be managed. In terms of the role itself, I think the ongoing investment in relationships will be key to establishing trust and understanding behind the decisions that are being made.  As the Head Coach of the Leinster Lightning squad, which features such a high number of centrally contracted players, I’m aware of the importance of such relationships.”