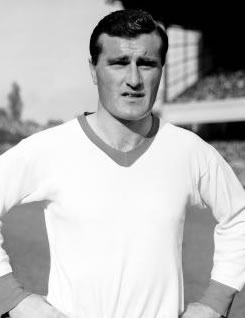 On 13 March 2015, Cork City Council will commemorate the sporting career of Noel Cantwell by renaming one of the roads connecting the Mardyke with the Western Road “Noel Cantwell Way”.  This is close to where Noel and his brothers grew up and very close to the famous Cork County cricket ground on the Mardyke.

The achievements of Noel Cantwell’s soccer career are, of course, very well-known including achievements such as captaining West Ham to the Division 2 title in 1958, captaining Manchester United in the FA Cup victory of 1963 and being part of the 1965 and 1967 Division 1 League winning sides.  He played 36 times for Ireland, scoring 14 goals in his career.  He later managed both Coventry City and Peterborough achieving success with both clubs.

This article concentrates on Cantwell’s cricket career which is, perhaps, less known but no less successful.  Although his opportunities on the cricket field were restricted by his soccer commitments, Noel, and his brothers, Frank and Gerry, were one of a number of families who grew up in the late 1940s and 1950s in and around the Mardyke area and who became leading lights in Cork cricket focused on the Mardyke.  Others from this era included Jim and Tom Kiernan, Pat Dineen, Jim Fitzgerald, Con Odlum, Danny Duggan, Noel and Dermot Giltinan and Billy Bradley to name but a few.

The three Cantwell brothers played their club cricket with Cork Bohemians, played with Cork County in friendlies against Dublin, Northern Irish and English opposition and all three played for Munster in Interprovincial matches in this period.  Cork Bohemians were probably the dominant club side in Cork and Munster in this period winning the Senior League on six occasions in the 1950s.  Frank also played in the South v North fixture in 1952 which was effectively an Irish final trial but only Noel would go on to play international cricket for Ireland.

Noel Cantwell was a left handed bat and a right arm medium paced bowler.  Contemporary accounts describe him as being a fluent stroke maker and a brilliant fielder.  While Noel himself downplayed his ability as a bowler, he is noted as “having the habit of taking wickets at club level when most needed”.  Noel Cantwell played five times for Ireland in the period 1956 to 1959.  Of the relatively few matches played by Ireland in that period (generally three or four matches per year), quite a few were played in late August or September when his soccer commitments would have ruled him out of contention for selection. Noel Cantwell made his debut for Ireland in a three day match against Scotland which took place in Edinburgh from 30 June to 2 July 1956.  Ireland escaped with a draw after Scotland scored 411-6 declared in their first innings.  Ireland were bowled out for 276 and, after Scotland declared their second innings on 56 for 1, made 76 for 4 in their second innings having been set 191 to win.  Noel performed very capably with the bat scoring 31 in the first innings and was 17 not out in the second.  He also bowled his only spell for Ireland in the Scottish first innings bowling 2 overs for 13 runs and no wickets.  One of his teammates in that match was Ian Lewis who, although mainly associated with YMCA Dublin, played a number of seasons with Church of Ireland CC and Cork County in this period.

In 1957, West Indies played Ireland in a two day game in Belfast, which was drawn, and in a one day match in College Park on July 12.  Noel Cantwell came into the side for the one day match in which West Indies scored 140 for 7 before bowling out Ireland for 61.  Noel was out for a duck on this occasion – his only consolation being, perhaps, that he was caught by Frank Worrell and bowled by Gary Sobers – two of the greatest players in West Indian and World Cricket history.  Other West Indian greats who played in that match were Rohan Kanhai and Wes Hall.  Gary Sobers took 5 wickets for 43 in 18 overs in that match.

In reporting on the New Zealand two day match, Wisden stated that “Ireland were saved from collapse by Cantwell who, after showing very sound defence, hit boldly”.  After that game, Noel was offered professional terms by Essex but he declined on the basis that he did not want to spend the whole year in England.  He obviously enjoyed his summer time and cricket in Cork.

Noel’s final game for Ireland was against Lancashire on 1/2 July 1959.  Ireland scored 146 and 75 while Lancashire scored 204 for 8 and 18 for 1 to win by 9 wickets.  Noel scored 25 and 11 in the game batting at Number 4.  Probably the best known player in the Lancashire side was Ken Higgs, the future test seamer, who bowled 11 overs in the match for 6 runs and 1 wicket.

Noel Cantwell was undoubtedly one of the best Irish soccer players in Irish sporting history.  He was also certainly one of the best cricketers to come from Cork.  Had his sporting career progressed differently and he had concentrated on cricket as his first sport, he might have blazed a trail for the Ed Joyce’s and Eoin Morgan’s of our time and have been a star player in English County cricket and Test cricket.