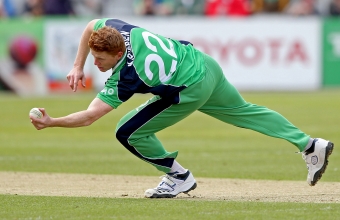 The nominations for the 2014 Cricket Ireland Awards have been announced, with Kevin O’Brien, Max Sorensen and William Porterfield all in the running for the RSA Men’s International Player of the Year Award.

Sorensen was ruled out of Ireland’s recent acclimatisation tour to Australia and New Zealand through injury, but a string of strong performances since October 2013 saw him take 29 wickets at an average of just 21.17.

After showing great form with Caribbean Premier League side Trinidad and Tobago Red Steel early in the season, Ireland’s vice-captain O’Brien continued to show his importance to Ireland over the course of the year, scoring 646 runs and taking 16 wickets.

Whilst Porterfield had a busy season with his county side Warwickshire, playing in both the Royal London 50-Over and the NatWest Blast T20 finals in the UK, he joined O’Brien as leading run scorer for Ireland, also with 646 runs.

Although there was no room for 2013 winner Ed Joyce in the men’s category, the family is well represented in the Women’s game, with Isobel and Cecelia Joyce both nominated for the RSA Women’s Player of the Year Award.  They are joined by strike bowler Louise McCarthy and wicket-keeper Mary Waldron.

Cecelia Joyce led the scoring for the Irish women, with 388 runs at an average of 32.33 over the course of a long season playing in the ICC World T20 in Bangladesh and the ICC European Championships.  Isobel Joyce managed 341 runs and 17 wickets in the same period.  McCarthy took 16 wickets as the main strike bowler, whilst Waldron impressed with the bat and gloves, scoring 161 runs to go with her 20 dismissals as wicket keeper.

The Sunday Independent Aengus Fanning International Emerging Player of the Year Award sees Stuart Poynter, Andy McBrine and Craig Young all nominated after breakthrough seasons for all three.  The trio have all impressed as they broke into the Ireland team, and have played themselves into contention for the World Cup squad after all three made their official ODI debuts against Scotland in September.

Poynter, who has been playing his cricket for Durham in the UK, scored an impressive century against Sri Lanka A, as well as showing he is an accomplished wicket-keeper. McBrine played in the ICC World T20 in March and stayed with the squad all year, taking seven wickets.  Young, who took five wickets in his ODI debut, finished the season with 15 wickets for Ireland.

Away from the national side there are plenty more awards up for grabs, for both playing and coaching, as well as club awards.

In youth cricket William McClintock, Jack Tector, Varun Chopra, James McCollum and Jamie Grassi have all been nominated for the Castleknock Hotel Junior Player of the Year after strong seasons at both club and junior representative levels.

After an extremely competitive and exciting season in club cricket across Ireland, three clubs have been shortlisted for the Tildenet Club of the Year Award.

YMCA Dublin won the RSA Leinster Division 1 and 3 titles, as well as the Intermediate Cup, the Tillain Cup and an impressive nine junior titles.

Cork County are the second nominee after claiming 2nd place in the LCU Division 2 to earn a second straight promotion, as well as winning the MCU league and celebrating their 140th anniversary.

Finally, Carrickfergus earned a nomination after their first team won an impressive four titles, including the RSA National Cup.  The club also celebrated league wins with the 2nd, 4th and U15 teams in successful year.

In addition to the categories with nominations, there will also be presentations for Johnston, Mooney & O’Brien Volunteer of the Year, Notts Sports Official of the Year, Shapoorji Pallonji Academy Player of the Year, Experis Outstanding Contribution to Irish Cricket and Hall of Fame induction.

The winners of all the awards will be announced on Monday 10th November, with the presentations taking place at the Cricket Ireland Awards Lunch on Friday 14th November.