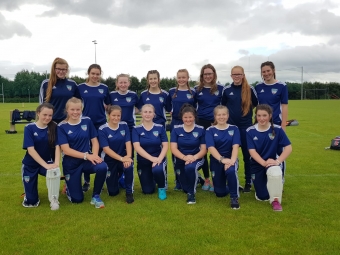 MAGHERAMASON - The North West Cricket Union (NWCU) has been nominated for National Governing Body Champion at the Female Sports Forum ‘Active, Fit and Sporty Awards’ this Wednesday, and NWCU General Manager Peter McCartney believes the nomination alone is great recognition for the work of his team in growing girls and women’s participation.

The Female Sports Forum’s ‘Active, Fit and Sporty’ Awards are being held on Wednesday 4 March 2020 at the Crowne Plaza Hotel in Belfast.

“We are delighted to be shortlisted for this award, and it’s something that our staff, coaches and volunteers should all be proud of. As a governing body, we are ambitious in our plans for growing the sport for women and girls.”

“The last few years have seen an investment by the NWCU in areas such as a Women & Girl’s Cricket Development Officer, a new talent development programme for our Under-17s Warriors Girls and an Under-9’s Girls ‘Smash It’ participation programme.”

“We now have a record number of eight local girls in Cricket Ireland national youth squads, and in 2020 we are going to be launching new girls’ Under-13s and Under-18s club competitions with a clear focus on the grassroots side of the game and helping our clubs grow.” Image: Indoor training session for girls in the NWCU

Further recognition of the NWCU team’s progress is Stephen McCartney (NWCU Under-18s Warriors Coach) has been nominated in the “Male Ally” category.

“It’s also great to see Stephen McCartney being nominated as well. He does a huge amount of work behind the scenes for female sport, and cricket in general. With his efforts at Coleraine CC, the NWCU and also in hockey, he thoroughly deserves the nomination.” We all wish Peter and his team well at the event.