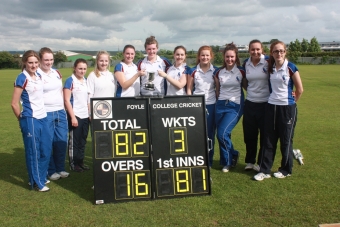 The victorious Foyle College side

On the 22nd and 29th of May the North West Cricket Union arranged and delivered cricket coaching and developmental workshops limited to female only players.

The workshops covered many playing aspects of the game with a particular emphasis on developing the hard ball game. There were 32 participants who attended these workshops, showing the popularity of the game within the North West. Given that this is the first year of specific, organised and focussed coaching being made available to female cricket participants within the North West Cricket Union, it makes for a very encouraging turn out.  These workshops were open to all current players of age 13 to senior level.

These sessions were devised simply to help further develop the Ladies game in the North West and encourage a greater number of female players into the game. As this is the first year of these sessions it is intended that in coming years a wider range can be delivered and participation encouraged further in more age groups. With the plan to regionally boost female participation levels and to provide cricket to players who are not yet of age to join their clubs’ senior team, the intention is to phase in specific age group coaching sessions for girls and in time mirror the player development pathways that boys currently experience.  This year’s coaching sessions have been restricted to include senior and Under 17 participants only due to the existing player progression pathways currently available to these groups of players.

With particular reference to the Under 17 age group, this year is again the first year of an inter-regional tournament seeing the best players both from North and South competing in a T20 competition in July. This tournament then makes these workshops not only an event that all players can learn or develop new skills in but also a great opportunity to progress towards regional or even international selection. The regional tournament and training sessions held in July will provide much of the bases for the selection of an Under 17 Ladies team represent Ireland in a 3 day tournament.

Presently in the North West the enthusiasm for the club game has not been reflected by the school game with numbers of girls playing cricket not as prominent. However there are still schools who continue to offer cricket as a sporting option to the female pupils in the school and recently two of these schools met in the Ladies Under 19 Schools Cup. This final saw Foyle College play host to Strabane Academy. This match saw Strabane post a competitive 81 in their 20 overs which in the end didn’t prove to be enough as Foyle past the post with 3 overs to spare.