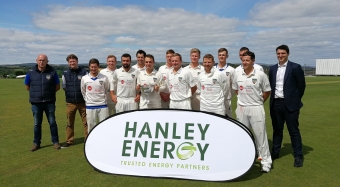 The North West Warriors are crowned champions for 2018

A convincing 140-run victory over the Northern Knights this afternoon at Bready Cricket Club has seen the North West Warriors claim the Hanley Energy Inter-Provincial Championship for the first time.

Ireland international Stuart Thompson claimed the final Knights batsman with the second ball of the 58th over, which saw the players and supporters of the Warriors squad burst into spontaneous celebration - this was not only the first time the side had won the Inter-Provincial Championship, but the first time any side other than the Leinster Lightning had achieved the feat.

Captain Andy McBrine accepted the trophy on behalf of the team, which had finished the series unbeaten with two wins and two draws.

One final match in the series will be played in early September between Leinster Lightning and Northern Knights, however the result today has guaranteed the Warriors were crowned champions with an unassailable lead in the table.

You can read more about the Hanley Energy Inter-Provincial Championships here.