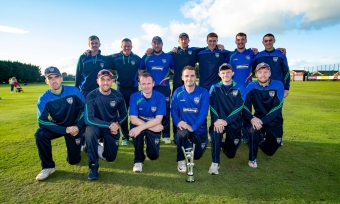 COMBER – The North West Warriors have won the 2021 Inter-Provincial T20 Trophy with a comprehensive 8-wicket win over Leinster Lightning today at Comber.

Having won the toss, the North West Warriors made great use of a tricky pitch with a flurry of early wickets – led by Player of the Match Conor Olphert who took 2-5 in the first powerplay. Kevin O’Brien was the only top-order batter who made it into double figures, but just when he was seeking to counter-attack, he fell for 23 off the bowling of Kennedy (2-14) and the Lightning innings collapsed to 59-8 after 14 overs.

Tailenders Gavin Hoey (37 off 28 balls) and Josh little (19* off 19 balls) came to the crease and the pair put on a potentially matching saving partnership of 53 at a rate of just over 9 an over to drag the Lightning to 113-9.

Needing a positive start to set the tone for the run chase, the Warriors Stephen Doheny (17) and William Porterfield (39*) put on 30 in the first 5 overs, but the loss of Doheny only propelled the Warriors run rate forward with Andy McBrine striking 24 off 19 balls, including two sixes. McBrine fell late on, but Porterfield and Shane Getkate (26* off 12 balls) saw the Warriors home by 8 wickets – and became deserved winners of this year’s competition.

Earlier in the day, the Northern Knights won a reduced-overs affair over the Munster Reds by 9 wickets to finish second on the table. The Knights bowlers restricted the dangerous Reds batting attack to 72-5 from their 10 overs, then chased down the target in less than 8 overs thanks to an unbeaten 54 from 27 balls by Ross Adair.