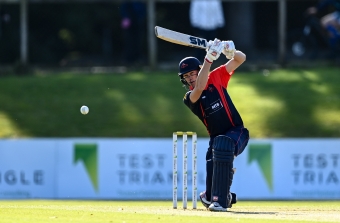 Harry Tector takes over from the retired Gary Wilson

Tector has scored 904 runs in 30 matches for the Northern Knights across all three formats since making his debut in 2018. James McCollum will be his vice-captain for the upcoming campaign.

Speaking of his appointment, the 21-year-old said:

“To captain the MTB Northern Knights will be an absolute honour.

“I’d like to think that I’ve represented the Northern Cricket Union (NCU) well over the three years that I’ve played for the Knights. I’m passionate about NCU cricket and I can’t wait to see more young cricketers get their chance with the Knights.

“To take over from Gary (Wilson) – someone that I learned so much from and a man that did an excellent job – is a huge honour.”

“Harry is somebody that has been identified as a potential future Ireland captain.

“I’ve had the pleasure of knowing him since he was 14 and made him captain in the Irish under-age setups. I know what an outstanding individual he is and what leadership qualities he will bring to this role.”

Tector succeeds Wilson – who announced his retirement from professional cricket earlier this month. Wilson captained MTB Northern Knights over the last two summers and led the side to the Inter-Provincial T20 Trophy title in 2019.

The 35-year-old has joined North West Warriors as head coach and pathway manager ahead of the upcoming season, replacing Ian McGregor who was head coach for five years.

Johnston paid tribute to Wilson’s services to NCU Cricket and wished him all the best going forward, saying:

“I want to congratulate Gary on a fantastic career.

“Even whenever he was across in England playing county cricket, he always came back and helped. Over the years he’s been a brilliant asset for me, coming over and driving the standards even higher.

“I have no doubt that he will do the same at North West Warriors and we wish him the very best in his new role.”

MTB Northern Knights start the 2021 season on May 4 when they take on Leinster Lightning in an Inter-Provincial Cup match at YMCA Cricket Club in Dublin.