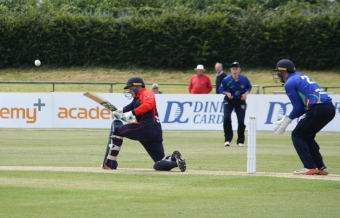 The Knights claimed a narrow victory

EGLINTON - Northern Knights held their nerve to come out on top by a mere two runs in a thrilling Test Triangle Inter-Provincial Cup game against the North West Warriors. The Knights had Ruhan Pretorius to thank for a wonderful 96, before Shane Getkate took the telling late wickets with the ball to secure the win.

Having won the toss and elected to bat, Marc Ellison and Pretorius got the Knights off to a solid and bright start at Eglinton Cricket Club. They gave the Knights a solid base to work with throughout the innings, with Pretorius getting some early boundaries away. However, Ellison fell to the bowling of Andy McBrine for 17, with the score 64-1. This brought Harry Tector to the middle, and the Knights continued to pile on runs in the middle passage of the innings. Accumulation was the order of the day for both, hitting classy shots also in the process, taking their side up to 147 in the 32nd over.

The two had given the Knights the ideal platform to explode from, but Tector’s dismissal off Graham Kennedy stalled that momentum. It wasn’t soon after that Pretorius fell agonisingly four runs short of what would have been a well deserved hundred.  After this, the Knights struggled to gain any impetus come the end of the innings, with Shane Getkate, Gary Wilson and Greg Thompson all departing. It was left to Mark Adair to pick the innings back up in the final overs. He carted an impressive 32 from 16 balls, including clearing the ropes twice, to bring the Knights up to a score of 245-9. The total seemed around a par score on a good Eglinton wicket.

INNINGS: The Northern Knights finish their innings on 243-8 from their allocation of 50 overs.

The Warriors will be happy with the fight back in the later stage of that innings, run chase will start in around 30 minutes time.

The Warriors run chase needed to start well, but it got off the worst possible start. David Barr was run out without facing in the first over of the reply after a mix-up, while Aaron Gillespie was trapped LBW to Josh Manley to leave the Warriors wobbling on 2-2 in the third over. Stuart Thompson joined William Porterfield, and the former provided the innings with some much needed counter-attacking punch. He played at a run a ball in scoring his 59, hitting nine boundaries and a six in the process.

However, the Warriors tend to lose wickets in clumps, and Porterfield and Thompson, followed by David Rankin, all fell in quick succession to the bowling of Tector and Jacob Mulder. It left the Warriors 101-5 and on the brink. Andy McBrine and debutante, Will Smale, both looked to consolidate and bring the Warriors back into the game. They did so in gritty fashion, batting doggidly on a pitch that was assisting the Knights spin trio of Tector, Mulder and James Cameron-Dow. Image: The Knights celebrate another wicket

McBrine fought hard for 24 but was done in the flight by Cameron-Dow and was stumped when trying to up the run-rate. Graham Kennedy was run-out soon after for similar reasons. It brought Graham Hume in to join Smale, and these two were the last hope for the Warriors. They both dug in hard to keep their side in the game, with Smale looking very composed in his debut 48. However, he missed out on his fifty going for much needed runs, and Craig Young fell two balls later, both off the bowling of Getkate to all but seal the tie.

Graham Hume and David Scanlon had other ideas though, and they went about trying to get the final 39 runs required from the last four overs. Hume led the charge and his 41 not out was an incredibly brave effort to bring his side over the line. Scanlon also joined in, hitting a big six in the final over to bring the Warriors within touching distance. However, with three required off the final two balls, Getkate planted a straight yorker to trap Scanlon in front, much to the delight of all involved with the Knights.

These two sides face each other again tomorrow, to start a crucial Test Triangle Inter-Provincial Championship game, starting at 11 am.