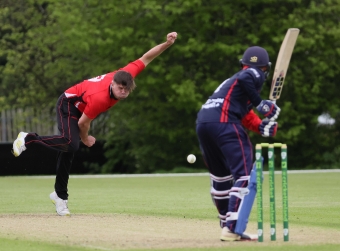 BELFAST – Run-a-ball 71 not out from Matt Ford steers the Munster Reds to hard fought win to kick off the Inter-Provincial 50-over Cup campaign.

Despite winning with two overs to spare, the Reds’ victory was far from guaranteed for much of the day. Chasing 249, they lost Murray Commins early to Knights captain Mark Adair, whose in-swinger beat the inside edge before the umpire adjudged the opener LBW.

Despite PJ Moor (48) and Tyrone Kane (24) compiling 62 for the second wicket, they, along with Curtis Campher (12) fell quickly to Ruhan Pretorius (3-30) in quick succession as 71-1 became 94-4. Things got worse for the Reds as Kevin O’Brien fell to debutant Matthew Humphreys. The left arm spinner’s maiden List A wicket was a memorable one, spinning and bouncing to find O’Brien’s outside edge to be caught behind.

Ford came to the wicket at number seven with 149 runs still required off 27 overs. Joined by Gareth Delany, the two stabilised the faltering chase, putting on 69 over the next 13 overs before Delany edged Foster to short third.

David Delany (16) kept things motoring before becoming Humphreys’ second victim. Requiring 47 off 50 and just three wickets left, both sides will have felt the game was there for the taking.

Undaunted, Fionn Hand came to the wicket, hitting the fourth ball he faced straight past the bowler in a statement of intent. His unbeaten 22 not out include two sixes, one of which was a mighty pull shot that landed on the Stormont Clubhouse roof. But it was Ford’s innings, which included nine fours and one six, that held the Reds’ chase together. It was fitting that he hit the winning runs with back-to-back pull shots that highlighted the control he’d displayed throughout his innings.

Earlier in the day, the Northern Knights handed List A debuts to wicketkeeper Max Burton and Humphreys, while it was a first game in Red for Kevin O’Brien and David Delany.

Despite being put into bat by the Reds under cloudy skies in Stormont, Knights openers Paul Stirling (35) and James McCollum (53) put on 76 for the first wicket.

The pair batted patiently early on, scoring just 22 off first eight overs, before racking up 54 off the next 38 balls before Stirling chopped on to the impressive Mike Frost.

The slow left armer bowled tidily during the middle overs, dismissing Pretorius (14) caught and bowled for 14, in claiming 2-27 from his ten overs.

Although James McCollum fell to Hand with Campher jumping full-stretch at cover to claim a difficult chance at the second attempt on the cusp of 30 overs, the Knights were well placed on 134-3. Hand (2-28), Tyrone Kane (2-55) and Campher (2-48) each claimed a couple of wickets, and at 194-7, it was Ross Adair who injected impetus into back-end of the innings. He hit six fours and an imperious six that landed on the sightscreen to finish unbeaten on 47 off 32 balls as the Knights closed their innings on 248-9.

In the end it wasn’t quite enough to get the Knights over the finish line. IP50 action continues at Bready on Tuesday, 10 May where the North West Warriors host the Knights.

Watch an interview with Player of the Match, Matt Ford: