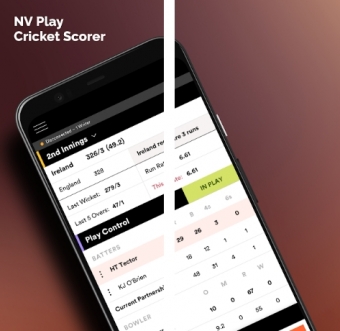 DUBLIN – Cricket Ireland and NV Play – the global cricket technology platform – have announced an extension of their partnership to provide a range of scoring, analysis and live streaming tools to cricket clubs across Ireland.

“We’re absolutely delighted to deepen our partnership with Cricket Ireland through this expansive recreational initiative. Through this project we will make available our best-of-breed digital scoring solutions, as well as offering a simple pathway for clubs to embrace livestreaming and video analysis through adoption of NV Play’s wider platform.

“Not only do we get to work even closer with our friends at Cricket Ireland, but we’re deeply excited to be able to deliver this perfect execution of our mission to democratise access to these elite tools and platforms and put them in the hands of recreational cricketers.

“This has the potential to really change the game for cricket in Ireland.”

“We want to provide a service that, firstly, creates greater visibility of the club game through live scoring and match centres, and secondly, meets the everyday needs of Irish cricket clubs. During the next two seasons we will work closely with NV Play and Provincial Unions to develop a best-in-class integrated system. The ultimate ambition will be to make online administration easier so that clubs, volunteers, administrators, coaches and umpires have more time to do the work necessary to get teams on the field, run competitions or officiate at games.

“The live scoring apps will also allow us to raise the profile of the club game and really put domestic Irish cricket on the world map.”

Over the course of the implementation period, Cricket Ireland and NV Play will monitor club and user feedback to ensure issues are resolved in a timely manner, while long-term improvements will be scheduled to create an ever-improving product that is relevant to Irish clubs.

The NV Play Cricket Scorer mobile app will be available in the Apple Appstore and Google Play, and is supported on the two most recent major versions of iOS (currently iOS13+) and all versions of Android from 8.0 Oreo up.

The powerful NV Play Pro Cricket Scorer software can be installed on your Windows-based laptop or desktop: click here to download installer.

As part of Cricket Ireland’s ongoing digital transformation initiatives, we have worked with NV Play to make available to all Irish cricket clubs a range of premium offerings that can extend a club’s use of the freely-provided Pro Scoring platform. These premium modules and their associated costs include:

In addition to the above, a range of performance-focussed Video Analysis packages will shortly be made available, offering all Irish club’s access to the same high performance tools as used in the elite game.

To celebrate the official launch of NV Play Live Streaming in Ireland, NV Play have put together a range of special introductory offers for those Clubs wanting to double down on their early video success, or to embrace the world of professional Live Streaming within their clubs for the first time.

For those clubs wishing to enter into a three-year minimum commitment, NV Play are offering a 50% discount (€300) on Live Streaming in the 2022 season, with a cost of €600 per season thereafter.

• A club/team scorer will need an NV Play Mobile and Desktop Scoring username and password for the NV Recreational Platform. If a scorer / club admin requires log-on credentials – they can request via NV Play Registration for Cricket Ireland Recreational Scorers.

• For teams who do not have a regular scorer - and if scoring is shared across a number of players during a game – it is recommended that a club apply for a generic log on for each team without a scorer. This will allow multi-users access the app and desktop modules (up to 10 users under one user profile) .

Configure and manage your Streams directly within NV Play using the same powerful Live Streaming platform leveraged by many pro users. Now your Club can take advantage of these Elite tools too.

Not quite ready to embrace Live Streaming? Can’t access the internet at your ground? Then maybe our Video Highlights package is right for you.

• Automatic video clipping of all match highlights, including 4s, 6s, wickets and major milestones
• Offline video capture, with ability to automatically upload during or after the match
• Automatic publication of highlights to uploaded
• Automated posting of highlights to your Club Twitter account

Licences for both the Live Streaming and Video Highlights packages are based on concurrent games, meaning that you can stream or capture one match at a time. If you wish to capture or stream multiple matches at the same time, multiple licences will be required. You can stream matches for multiple teams on a single licence, as long as they are played at different times (e.g. 1st XI on Saturday followed by 2nd XI on Sunday).

Note: appropriate camera hardware is required to leverage these packages. You can source your own cameras, or simply take advantage of NV Play’s range of curated camera kits. Check out the kit details here: https://www.nvplay.com/live-streaming