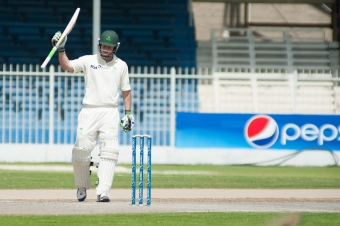 Ed Joyce finished with 155 for Ireland

Ireland’s cricketers recorded the highest total in their 158 year history to remain in total control on the second day of their InterContinental Cup clash against the UAE in Sharjah.

Centuries from Ed Joyce (155) and Niall O’Brien (126) helped the Irish amass a mammoth 589/7 before declaring in an effort to take wickets late in the day against the UAE side who had been in the field for 164 overs.

It was a real team effort from Ireland whose top five batsman all passed 50, sharing significant partnerships along the way.

Ed Joyce took only one delivery to turn his overnight 99 into his third century for Ireland - his first since 2005 - and continued to dominate the beleagured UAE attack.

Joyce had reached 155 and looked destined to break another Irish record - Eoin Morgan’s highest individual score of 209, also against the UAE back in 2007 - before disaster struck when a firm drive by Niall O’Brien was deflected onto the stumps by Khurram Khan with Joyce out of his ground. There was to be no respite for the tiring UAE side as Niall O’Brien and Gary Wilson both played positively, rotating the strike with some excellent shot placement and quick running, while also finding the boundary ropes regularly.

Their fourth-wicket stand of 126 was ended on 494 when O’Brien misjudged a sweep giving Arshad Ali the simplest of catches. His 126 came from 234 balls, and included 11 fours and 1 six.

It was O’Brien’s first hundred for Ireland since the InterContinental Cup final win against Namibia in 2008, and brought his total in the competition to six - only Ryan ten Doeschate has scored more.

Andrew White (5) missed out on the run feast, but by that stage Ireland had 519 on the board.

Following the loss of Gary Wilson for 84 (9 fours, 1 six), Kevin O’Brien (34*) and John Mooney (26) provided the late impetus adding 56 in 55 balls. The dismissal of Mooney signalled the declaration, leaving the UAE with a maximum of 26 overs to survive.

Middlesex seamer Tim Murtagh impressed in his opening spell, and was rewarded with the wicket of Safdar Niazi who was palpably lbw for 16, playing all around a straight one.

Ireland wicket-keeper Gary Wilson wasn’t happy to miss out on a century, but was pleased to be part of the record-breaking team effort: “It’s disappointing - I thought I played well and probably deserved a hundred - but having said that I suppose I was lucky not to be out first ball when I might have been lbw!”

Wilson was hopeful that Ireland would be able to force a win in the remaining two days: “It’s not easy to score if bowlers keep it straight and that’s what we’ll be looking to do tomorrow. We will learn from what they have done. The ball swung for a few overs and it’s started reversing pretty quickly.”

Centurion Niall O’Brien was delighted to have made such a positive start to 2013: “I hope to have a big season after the ups and downs of last year but it’s a nice way to start. The team is in a great position in this match and hope we can crack on, but it’s going to be hard work. Still, we have a very strong batting line-up and a good varied bowling attack.

“Tim Murtagh is a very good bowler, who has got great control, a like for like with Trent (Johnston) and he has hopefully three or four years ahead of him in Irish colours. Paul Stirling and George Dockrell can also do a job for us in the next couple of days. We have hard cricket ahead of us and hopefully we can get a victory on Friday”

The UAE still have a formidable task in front of them tomorrow, requiring a further 382 to avoid the follow-on.