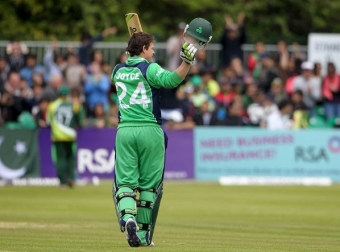 Ed Joyce made a hundred against Pakistan in May

Kevin O’Brien and Ed Joyce have been named as two of the four nominees for the ICC Associate and Affiliate Cricketer of the Year at the 2013 LG ICC Awards.

England’s James Anderson, South Africa’s Hashim Amla and Australia captain Michael Clarke have all been short-listed for the top honours at this year’s LG ICC Awards 2013.

The votes for the LG ICC Awards 2013 short-lists have now been cast by the independent, 32-person voting academy*, and these three men, alongside England captain Alastair Cook, India captain MS Dhoni and Sri Lanka’s Kumar Sangakkara, are the nominees in the running to receive the prestigious Sir Garfield Sobers Trophy.

Also featuring in the short-list for the ICC Test Cricketer of the Year Award alongside Anderson, Amla and Clarke, are Dale Steyn of South Africa and the Indian duo of Ravichandran Ashwin and Cheteshwar Pujara.

The LG ICC Awards shortlists, which were announced today in Mumbai by ICC Chief Executive David Richardson, see 12 different ICC Members represented across the categories for the top individual prizes in international cricket.

Both Sangakkara and Dhoni also feature in the short-list for the ICC ODI Cricketer of the Year, which also includes the Pakistan duo of Saeed Ajmal and Misbah ul-Haq, as well as the Indian pair of Shikhar Dhawan and Ravindra Jadeja.

Taylor, Bates and Lanning also feature in the short-list for the ICC Women’s T20I Cricketer of the Year, along with England’s Sarah Taylor and the West Indies duo of Shanel Daley and Deandra Dottin.

The long-lists of nominations for each award were put together by a five-person ICC selection panel, before a 32-member voting academy trimmed the nominees to the short-lists announced today.

The ICC selection panel was chaired by former India captain and current chairman of the ICC Cricket Committee Anil Kumble. The panel also includes former internationals Alec Stewart of England, Catherine Campbell of New Zealand, Waqar Younis of Pakistan and Graeme Pollock of South Africa, while the academy comprises highly credentialed cricket personalities from around the world*, and include a host of former players, respected members of the media as well as representatives of the Emirates Elite Panels of ICC Umpires and ICC Match Referees.

To qualify for the ICC Emerging Cricketer of the Year Award, a player must be under the age of 26 and have played fewer than five Tests and/or 10 ODIs and/or five T20Is at the start of the performance period.

The ICC Associate and Affiliate Cricketer of the Year award serves to recognise and reward the efforts in international matches of the outstanding cricketers from the teams outside the ICC Full Members.

This year’s short-list sees two nominees coming from Ireland in the form of Kevin O’Brien and Ed Joyce, alongside Kyle Coetzer of Scotland and Nawroz Mangal of Afghanistan.

Based on the period between 7 August 2012 and 25 August 2013, the LG ICC Awards 2013 take into account performances by players and officials in a remarkable period for the game.

Short-lists of nominees (in alphabetical order)

Mahela Jayawardena, batting on 91 with Sri Lanka on 229-7, gloves Jeetan Patel’s delivery and is caught at the wicket by New Zealand wicketkeeper Kruger van Wyk and starts walking before the umpire raised his finger. The nomination has come from a member of the New Zealand squad who felt Mahela’s actions were deserving of recommendation for the award as it happened at a very crucial stage of the match and Mahela, whose side was in some bother, walked without even waiting for an umpire’s decision.

Farhad Reza of Bangladesh, in an attempt to catch Pakistan opener Nasir Jamshed, touches the boundary.  Before the on-field umpires refer the catch to the third umpire, the 26-year-old Bangladeshi signals a six, confirming that his foot had touched the boundary. This was done with minimum fuss.