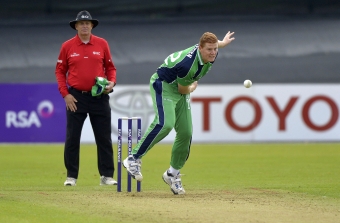 Ireland stars Kevin O’Brien and Cecelia Joyce have been rewarded for impressive international seasons by being named winners of the top prizes in the 2014 Cricket Ireland Awards.

O’Brien, who fought off tough competition from captain William Porterfield and Max Sorensen for the award, had a strong finish to 2013 as his 47 helped his side to victory over Afghanistan in the ICC Inter-Continental Cup final in December as Ireland to completed an unprecedented international treble.

The Leinster Lightning all-rounder ended the 2014 international season in similar style, captaining Ireland to a series victory over neighbours Scotland at Malahide scoring 159 runs across the three matches.

Cecelia Joyce completes a memorable personal season by being named RSA Women’s International Player of the Year ahead of sister and captain Isobel, bowler Louise McCarthy, and vice-captain Mary Waldron. Joyce played a starring role in Ireland’s clean-sweep in the European Championships where she scored a blistering 119* against Scotland en route to victory. North West Warriors fast-bowler Craig Young made a huge impact in his breakthrough international season, claiming five-wickets on debut against Scotland in September. The Bready pace-man has already confirmed himself as one of Ireland’s front line quick bowlers and is this year’s Sunday Independent Aengus Fanning Emerging Player of the Year.

Having scored 94 against Holland and 80 against Scotland as Ireland went on to win the 2014 ICC Europe U19 Challenge Series, amassed 400 runs and taken 13 wickets for Waringstown, as well as making his Northern Knights debut and being called into the Ireland winter training panel, James McCollum has been named as the Castleknock Hotel Young Player of the Year.

Another breakthrough fast bowler – Shapoorji Pallonji Cricket Ireland Academy player Peter Chase - had a year to remember breaking into the Ireland A side for their fixture against the MCC, before getting full international recognition against Sri Lanka A later that month and recently toured Australia and New Zealand with the senior squad.

2014 also saw Chase make his first-class debut for County Championship side Durham, and he is the 2014 Shapoorji Pallonji Cricket Ireland Academy Player of the Year. Long been regarded as one of the best cricketers Ireland has ever produced and despite entering his 48th year he is still turning out performances in top level domestic cricket. With over 700 North West Premier League runs to his name in 2014 at an average of 64.75, Dekker Curry is named as the O’Neills Club Player of the Year.

Widely regarded as Ireland’s top international umpire, Mark Hawthorne picks up the Notts Sport Official of the Year Award for the second year running after a season which saw him officiate in four One Day Internationals including the Ireland v Scotland series at Malahide, and Scotland’s clash with England at Aberdeen.

For his work with club side Waringstown and guiding Ireland Under-15s to a clean-sweep at the 2014 European Championships at Rugby School, Simon Johnston is the 2014 Toyota Coach of the Year.

Winners of the Irish National Cup, the NCU Section 1, the Ulster Shield and the NCU Twenty20 to go along with league wins for the 2nd XI, 4th XI and U-15s, what a year it has been for Carrickfergus the winners of the Tildenet Club of the Year Award.

The winners along with the Johnston, Mooney and O’Brien Volunteer of the Year and recipient of the Experis Outstanding Contribution to Irish Cricket award will be presented with their awards at the 2014 Cricket Ireland Awards lunch on Friday November 14th.

Tildenet Club of the Year – Carrickfergus