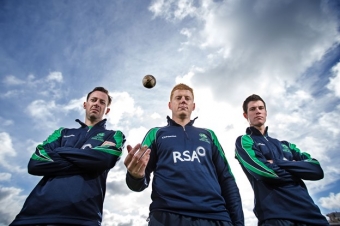 Kevin O’Brien was backing Ireland to make a major impression at the ICC World T20 when the squad left for a pre-tournament training camp in Dubai yesterday (SUN).

For O’Brien, and the two other veterans of the 2007 World Cup - his brother Niall and William Porterfield - there is a sense of déjà vu, because their opening group match in Bangladesh will be against Zimbabwe on St Patrick’s Day.

Ireland famously tied with the African side in their opening game of 2007, before scoring an incredible win over Pakistan two days later on March 17.

“Paddy’s Day has been kind to us in the past and I hope it’s a good omen for when we play Zimbabwe in the first match - that’s a massive game for both teams,” O’Brien said, without ignoring the threat posed by the UAE and the Netherlands in Ireland’s other Round One games.

“We have serious ambitions to go all the way in the tournament, and we plan to get off the plane in Dhaka and hit the ground running when the competition gets under way.”

O’Brien believes the lessons learned on the recent tour of the Caribbean - where Ireland played three matches in Trinidad and three in Jamaica, including a T20 victory over the West Indies - will serve them well in the coming campaign.

“We take confidence from having beaten the world champions on their own patch, and I suppose that puts added pressure on us to qualify from Round One,” the Railway Union all-rounder added.

“Six games of high quality cricket in the West Indies were great preparation for this trip. If we’re being harsh on ourselves we probably left a few results out on the pitch there, especially at Sabina Park when we couldn’t chase 97 to clinch the T20 series.

“We know Zimbabwe are a good team with some very dangerous players in the format. I think we can go all the way but a lot will depend on how we bowl on the slower, lower pitches in Bangladesh.

“The bowling unit showed last month on similar pitches in the Caribbean that they can bowl sides out and restrict quality sides to low totals. If we can be clinical with the bat and back ourselves, then we can beat anyone on our day.” Ireland coach Phil Simmons believes the new format of the World T20 - where eight smaller cricketing nations fight for two places to join the eight top ranked sides in Round Two - will actually benefit the teams that emerge successfully from Round One.

“I don’t subscribe to the view that it’s not good to have to go through what some see as another qualifying hurdle,” he said. “In the last two World T20s we have played only one completed game, and suffered two wash-outs.

“This way, if we win the group we’ll have played three matches as well as two warm-ups in Bangladesh which would give us a serious advantage in terms of acclimatisation against Full Members and the chance of getting them cold before they adapt.

“We had a great experience in the West Indies and it’s a measure of how far the team has come in seven years that we and the fans are disappointed because we could not quite claim a series win against the World T20 champions.

“We’ve put in a lot of hard work in the West Indies and will continue that preparation in Dubai where we have two practice matches scheduled against Worcestershire and Hong Kong.” In addition, Ireland will have official warm-up games against Nepal and hosts Bangladesh.

George Dockrell, the young left-arm spinner who announced himself to a global audience with two eye-catching performances at the 2010 event, is confident of making another major impression on the traditionally spin friendly tracks.

“2010 was obviously my debut in a major international competition and great memories for me in those games against West Indies and England. I really enjoy playing in Twenty20 cricket, which is a great challenge with the batsmen looking to be particularly aggressive against the spinners, but on the flip side it gives you the opportunity to take wickets.”

Dockrell echoed the sentiments of O’Brien about emerging from the first group stage. He said: “We’ll definitely be backing ourselves to qualify for the next phase. We beat Zimbabwe, the last time we played, and also the UAE and Netherlands a number of times.

“The format’s slightly different now, and I think it gives us a better chance, although there’s a lot more expectation on our shoulders now. We made some really great strides in the past month and I’m really looking forward to the tournament.” The game against Worcestershire is in Dubai on March 7, while they face Hong Kong under lights in Sharjah the following day.

Nepal are their opponents in the first warm-up game on March 12, while the Bangladesh game is two days later.

The tournament proper begins with the crucial Zimbabwe match on March 17, with UAE to follow on the 19th, and the group stage concludes against The Netherlands on the 21st.

If Ireland successfully emerge from the group, they will play against Sri Lanka, South Africa, New Zealand, and England.

Ireland’s fixtures at Twenty20 World Cup are as follows
All Matches Broadcast Live on Sky Sports;

If Ireland progress from initial group, it is then the ‘Super 10’ Phase of the Tournament;