O’Brien named in Team of the Group Stages 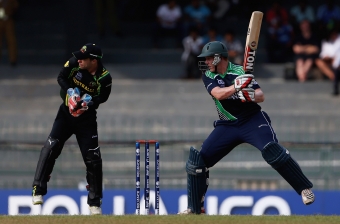 Kevin O’Brien has been named in Wisden India’s select XI made up of the best players from the group stages of the ICC World Twenty 20. Kevin showed good form in the matches versus Australia and the West Indies and he was the only non-test nation player selected.

To pick a playing XI from a wide group of players from across 12 teams is always an interesting, and subjective, exercise. A wide range of factors need to be taken into account, none more so than the balance of the side, which is what we believe the XI we have picked from the group stages of the ICC World Twenty20 2012 offers.

There is a wealth of batting talent – classicism in the form of Shane Watson, Virat Kohli and Marlon Samuels, unorthodoxy from Chris Gayle, Brendon McCullum and AB de Villiers, the nominated captain. Kevin O’Brien at No. 7 offers both batting depth and an additional medium-pace bowling option to complement the pace attack of Dale Steyn and Mitchell Starc, whose left-arm angle is a most useful weapon in any format, and Watson.

Sunil Narine and Saaed Ajmal are the two spinners, identical only in that they both possess multiple variations but each one a match-winner in his own right. There would appear to be a profusion of off-spinners with Gayle and Samuels too in the mix, but both Narine and Ajmal regularly take the ball away from the right-handers, too.