May 8th 2013 by Cricket Ireland | International 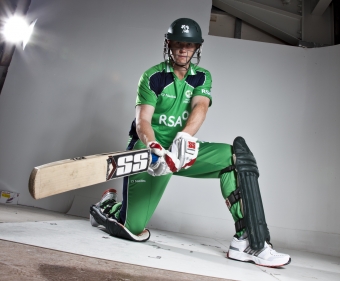 O'Brien is enjoying the spotlight and targeting two wins in Clontarf

O’Brien is very much the man in form, after leading his Leinster Lightning side to a superb win with an unbeaten century in the opening game of the RSA Inter-Provincial Series.

The Irish vice-captain has played 190 times for his country, but one of his happiest memories came in just his 15th match, when Ireland announced themselves to world cricket with a famous St Patrick’s Day win over Pakistan in the 2007 World Cup.

“It’s incredible to think it’s six years ago. Irish cricket changed forever that day and we’ve never looked back. It was obviously a great day for the O’Brien family with Niall getting the Man of the Match, and me being there at the end - I don’t think I’ve ever made a more important 16 not out!”

On the challenge faced by the Pakistan team, O’Brien was all too aware of the task ahead, saying: “They are one of the favourites for the Champions Trophy and it’s easy to see why. They’ve got world class players throughout their team and in Saeed Ajmal and Junaid Khan have two of the best bowlers currently in world cricket.  They’ve got a huge amount of experience in their batting and it’ll be a tough examination for us.”

A capacity crowd is expected at Clontarf and O’Brien is hoping a vocal home support will help Ireland as they look to claim another high profile scalp: “The game is on course for a sell out which is fantastic news. The Irish and Pakistan fans will create a carnival atmosphere and Clontarf is a magnificent setting. We’re overdue for a big win there and hopefully we can give the Irish fans something to cheer about.

Misbah-ul-Haq is relishing the trip to Ireland, with the RSA Insurance ODI Series providing vital tough match action for his team ahead of their Champions Trophy campaign. The Pakistan captain is well aware of just how dangerous an opponent Ireland are - especially in their home conditions.

“We’re very much looking forward to returning to Ireland for two highly competitive matches in two weeks time. We are lucky that Pakistan have a very strong following away from home and we’re hoping for a real carnival atmosphere in Dublin with the local Irish and Pakistani communities coming to support in great numbers to make for two great days out on May 23rd and 26th.”

“I have great memories from the matches in Belfast two years ago where we enjoyed a fantastic welcome and we were happy to win both matches despite Paul Stirling making a century for Ireland. We know that Ireland have many great players and we will not be underestimating them on their home soil in Dublin.”

The Pakistan squad looks very strong with world-class bowlers in Saeed Ajmal, Junaid Khan and the giant 7ft 1 inch fast bowler Mohammad Irfan, while the experienced batsmen in their line-up include Shoaib Malik and Imran Farhat. There’s also a place for wicket-keeper batsman Kamran Akmal, who played two season for Limavady in the North West.

With the matches pushing towards a sell-out, fans wishing to see the action are urged to take advantage of the “Early Bird” special ticket offer, which offers a 20% discount on all tickets and a chance to take purchase a special two match package finishes on Friday. Further details on tickets can be found by clicking here.