O’Brien Shines for Surrey at Lord’s 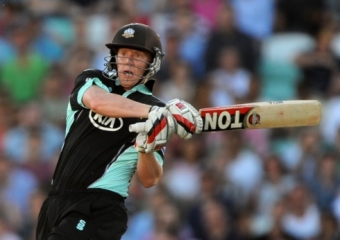 Kevin O’Brien’s short stay with Surrey ahead of a trip to the Caribbean Premier League has proved a fruitful one following a man of the match performance for Surrey at Lord’s last night.

It was a sell-out crowd for the London ‘derby’ at the home of cricket, but the night had a distinctly Irish feel as Kevin O’Brien, Gary Wilson and Paul Stirling started in the crucial Friends Life T20 match.

Kevin O’Brien got going very quickly and hit his first ball for four en route to a boundary laden fifty that came in very quick time. He ended by being bowled for 54 that came off just 24 balls and helped Surrey to 178. Paul Stirling opened Middlesex’s reply but despite making 19 he was soon caught out by his fellow Irish international and Middlesex collapsed to 92 All Out losing by 86 runs.

Kevin O’Brien chatted to Surrey Cricket after the match

Highlights of the match