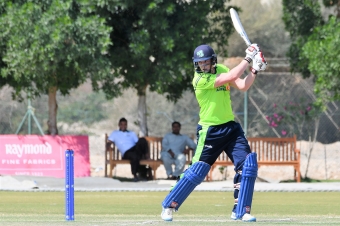 Ireland captain Gary Wilson won the toss and chose to bat first, looking to make first use of a wearing pitch on a humid day in Oman. Openers O’Brien and Paul Stirling (36 from 27 balls) began with a whirlwind 80-run stand from 50 balls to give Ireland a great platform for the innings. In recent times Head Coach Graham Ford has highlighted an area of improvement for this young side was to finish off an innings after a good start, but there was no cause for concern today.

With O’Brien in imperious form, the other Irish batters simply looked to support him. He brought up his half-century off 29 balls, then accelerated further to bring up his maiden T20I century in just 24 more balls. This was not only O’Brien’s first T20I century, but the first century registered for Ireland in T20I history.

Ireland’s second-highest run-scorer in this format pressed on and was finally out for 124 from 62 balls. His innings was punctuated by 12 fours and 7 sixes – continuing his fine run of form in T20I cricket for the national side which has seen him score 296 runs at an average of 49.33 in six innings over the last three weeks.

With little to lose, the Hong Kong batters tried to hit out from the off, but found scoring more difficult than the Irish side earlier in the day. 20-year old Haroon Arshad, in only his second T20I, was the only batter to really master conditions, scoring 45 from 27 balls – his innings including 4 fours and 2 sixes. Ehsan Khan made it a good all-round day for himself after taking 3-32 with the ball by scoring some late consolation runs (28* from 19 balls), but the Irish bowlers were in firm control throughout and Hong Kong finished on 142-9.

The Irish squad now has a day off tomorrow, before their final match of the current series against Nepal on Wednesday. That match will start at 6.30am (Irish time).