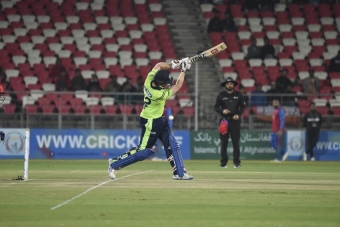 DEHRADUN - A pulsating run-chase orchestrated by Kevin O’Brien ensured that the final T20I from Dehradun went down to the wire as Ireland’s bid to claim a victory in the third match of the series and thus avoid a whitewash against Afghanistan was sustained to the last.

In the final analysis the tourists fell 32 runs short, as the task of hauling in Afghanistan’s immense 210-7 proved just too much. Kevin O’Brien’s brilliant 47-ball 74 underscored a spirited chase but Rashid Khan was at his supreme best, claiming a hat-trick to suffocate the Irish middle-order and take his team to a third straight win in the series.

It proved to be a masterstroke to hold back Rashid until the second half of the innings, and an epic tussle between O’Brien and the world’s No.1-ranked T20 bowler was finally settled by the bowler, who induced a thin edge for the keeper, Shafiqullah Shafaq, to take a smart low catch.

It was a somewhat anti-climactic end to a classic innings by the Irish opener and with his departure went Ireland’s hopes of hauling in a famous victory. Thereafter Rashid was irrepressible, and he duly claimed his first T20I hat-trick with the first three deliveries of his third over.

The final scoreline belies the tightness of the match. O’Brien was dominant from the start, pumping Zia Ur Rehman over mid-wicket with a short-arm pull, and repeating the shot two balls later, this time along the ground. After three overs, Ireland were on 32-1 and any sense that Afghanistan would cruise to victory had been shelved.

The final over of the powerplay confirmed it. O’Brien muscled the first ball over extra cover for a maximum and after six completed overs Ireland were up with the rate, rattling along at 11-per-over, for the loss of only Paul Stirling, who had holed out to mid-on for 10.

Andy Balbirnie had joined O’Brien at the fall of Stirling’s wicket and the pair were irresistible, sharing a 96-run partnership. Balbirnie ticked over in O’Brien’s slipstream, working the spinners through the offside, hanging back to cut, and generally bringing an assuredness to the run chase. But in the 14th over, with the century partnership one hit away, Zia Ur Rehman deceived him with a slower ball to inch through his defences.

With Balbirnie gone for 47, the wicket opened up the game for the fielding side. In the next over, a stunning direct hit at backward point by Najibullah Zadran removed the dangerous Stuart Thompson, swinging the match in Afghanistan’s favour. Afghanistan’s innings was inspired by another outstanding display of range hitting, this time by the evergreen Mohammad Nabi, whose pedigree as one of the world’s most consistent short-format all-rounders was once again in evidence throughout the match.

With the bat, Nabi had joined the fray with Afghanistan having stalled following another lively start. From 46-0 after four overs, Ireland had restricted the batsmen thereafter, but initially in partnership with Asghar Afghan, Nabi soon set about the Irish seam attack. His fifty came from just 28 balls but it was Nabi’s subsequent assault that took Afghanistan up towards the 200-mark, with his next eight deliveries yielding 31 runs. Later in the field, he bowled economically, going at just seven runs-per-over, and claimed a superb boundary catch to see off George Dockrell.

For all of O’Brien’s brilliance and a number of promising performances in the field – it was Nabi’s all-round class that edged the match and brought him the Player of the match award.

The two sides will begin a five-match one-day international series starting on Thursday at the same venue.