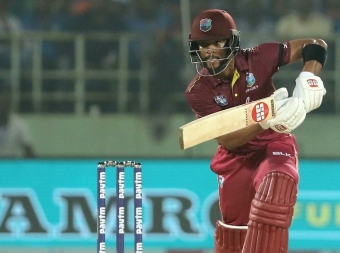 West Indies were dominant in their performance today

BRIDGETOWN, Barbados – Ireland Men’s cricket team showed glimpses of promise, but were soundly defeated by a confident West Indies side in the 1st One-Day International of a three-match series today at Kensington Oval, Barbados.

Newly-appointed captain Andrew Balbirnie started his tenure well by winning his first toss, and elected to bat on a track that looked slow but gave encouragement to bowlers who hit a good line and length. The day also featured two other milestones – Gareth Delany was making his ODI debut, and Boyd Rankin was playing in his 150th match for Ireland across all formats.

Ireland started sprightly - openers Paul Stirling and Delany both striking powerful boundaries as they looked to blunt the early West Indian attack. Stirling was looking comfortable, however fell for 15 when he pulled a chest high ball from Alzarri Joseph (4-32) to short mid-wicket.

Captain Balbirnie came in next and looked in attacking mood from the off, striking two fours and a six in a short stint at the crease. Sensing that variation in his bowling attack was needed, West Indian skipper Kieron Pollard brought on spinner Roston Chase (1-35), who immediately removed Balbirnie for a quickfire 16.

Once Stirling and Balbirnie were gone, the Irish batters struggled to recover any sense of the ascendancy. Five of Ireland’s top six batters all made it into double figures, however no one took control and played an anchor role. For the home side, a combination of nippy pace bowling from 23-year old Joseph, and the spin bowling of Chase and Hayden Walsh (2-30) caused the visitors difficulty in building partnerships. Lorcan Tucker (31) and Mark Adair (29) managed to put on a 54-run stand - and the tail-enders Barry McCarthy and Boyd Rankin added 30 for the last wicket - but Ireland’s total of 180 from 46.1 overs looked well below par for a ground that averages 247 runs in the first innings in ODIs.

Needing a good start with the ball to defend their low total, the Irish bowlers came up against the belligerent opener Evin Lewis. The 28-year old left-handed Trinidadian played all around the ground, punishing anything short or over-pitched. He brought up his half-century from 46 balls, and rarely looked flustered during his innings of 99* from 99 balls – falling agonisingly short of what would have been a well-deserved century.

The West Indian batters didn’t have it all their own way. At 98-1 in the 19th over the Irish spinners Simi Singh (2-44) and Andy McBrine (1-40) managed to snap up three quick wickets. However, what slim hopes the Irish side had of getting itself back into the game soon evaporated with Lewis and Roston Chase (19) taking the home side to the brink of a comprehensive victory. Boyd Rankin (1-26), possibly Ireland’s most threatening bowler, claimed Chase late on, but Lewis hit a boundary to take his side to victory.

Evin Lewis was on 95* with one run to win. To bring up his century and win the game he needed to hit a six. He went for it…and connected…but the ball landed 5 metres short. 99* will do.

After the match, Ireland captain Andrew Balbirnie was asked where the game was lost. He said:

“I think it was obvious, with the bat. When you win the toss and bat first, and you’re all out for 180, you’re obviously below par. We are disappointed with our dismissals throughout, but we haven’t got long until the next game, so we’ve got to dust ourselves off, regroup and come out on Thursday all guns blazing.”

“They bowled well, but I think we still have a lot of areas to work on with the bat. There’s no reason why we can’t turn it around and look to put in a much better performance in the next game.”

“It [the captaincy experience] was brilliant – it’s something I’ve always wanted to do, and to be able to do it with a great group of guys is amazing. But, at the same time, you want to win games of cricket - particularly as captain – so it’s just unfortunately disappointing tonight.”

The second match of the ODI series will be on Thursday 9 January 2020, starting at 5.30pm (GMT) at the same venue. For fans in Ireland and the UK, the second match will be televised on Sky Sports Cricket channel.