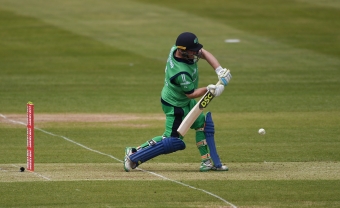 BRIDGETOWN, Barbados – Ireland Men’s cricket team went from delight to despair in a matter of minutes as it lost to the West Indies by one wicket with one ball to spare in the second One-Day International in Barbados today.

One ball short of 100 overs of cricket produced a heart-breaking result for the Men in Green as they came within a matter of millimetres from recording what would have been only their second-ever victory over the mighty West Indies in ODI cricket.

The last over of a seesawing and tense match saw Ireland needing just one wicket to win, while West Indies needed five runs. The first two balls yielded just a single, but the third ball caused an almighty uproar of delight when Ireland thought they had a run out. After the potential dismissal was referred to the third umpire for adjudication, extensive video replays were inconclusive whether bowler Mark Adair’s hand or the ball had broken the wicket first. After what seemed an eternity for the third umpire to make a call, the decision was not out.

A near run out off the very next ball added to the drama, but the West Indies number 11 Sheldon Cottrell powered the second last ball over the boundary for six to claim victory for the home side by one wicket.

Earlier in the day, Ireland captain Andrew Balbirnie won the toss and elected to bat first for the second successive game. Showing faith in his side, the skipper made no changes to the line up from the first match on Tuesday.

In-form opener Paul Stirling top scored with 63 from 79 balls, blending customary power-hitting with more patient periods that demonstrated his determination to bat as deep in the innings as possible. His partner, Gareth Delany gave a glimpse of his clean-hitting style in his short innings of 14. While short, his innings did include one memorable flat bat pulled six in front of square off Sheldon Cottrell.

The Irish nemesis from the last match, 23-year old Alzarri Joseph once again became a handful for the Irish batters, first removing captain Balbirnie for 10 then taking three more scalps to finish with 4-32 – exactly the same return he had in the first match.

William Porterfield, playing in his milestone 300th game for Ireland, made a solid 29, while Kevin O’Brien will be disappointed he didn’t go on with his start, falling caught in the deep for 31 from 26 balls.

A late on effort of 34 from Simi Singh, and some big hitting from Barry McCarthy (17*) gave the Irish total a boost, with McCarthy hitting a six off the last ball of the innings for Ireland to finish on 237-9. Image: Kevin O’Brien was out after compiling a promising 31

While a better batting effort than in game one, the Irish score was still considered below par and would require a significant bowling effort to restrain the rampant West Indian batting line-up.

Tight pressure bowling early by Andy McBrine (2-37) and McCarthy (2-28) resulted in the wicket of last match Windies batting hero Evin Lewis, followed quickly by two more dismissals to have the home side on 24-3 from 9 overs. The Irish fans in the crowd and at home dared to dream, but the Windies’ Shai Hope (25) and Nicholas Pooran (52) stabilised with a 52-run stand.

Simi Singh broke the partnership, before Pooran was joined by his captain Kieron Pollard (40). The pair put on a quickfire 64-run stand and looked to be taking the game away from the visitors. That was until a short rain delay broke the batters concentration, with the Irish bowlers regrouping and claiming three quick wickets.

From then on the match grew tense, with the home side inching its way towards the target, while Ireland claimed two valuable wickets.

In the end, it came down to the last over and the drama that ensued.

Only captaining the national side for the second time, Balbirnie impressed many observers with his tactical bowling switches and attacking field placings. His calmness during the final stages helped drive his side on, and – while he will be bitterly disappointed – the confidence he will gain from the experience in time will be an important learning opportunity.

“We’re relieved about the win but it’s a team game, we all put in the effort. The wicket was a bit more even than in the first game, and we wanted to bat sensibly to get to the score. When I went out to bat, there were a lot of balls to go there and I was looking to play ball every ball on merit. The win means a lot to everyone, but it’s not finished, we have one game to go.”

The third match of the ODI series will be on Sunday 12 January 2020, starting at 1pm (GMT) at the National Cricket Stadium, St. George’s, Grenada. For fans in Ireland and the UK, the third match will be televised on Sky Sports Cricket channel.