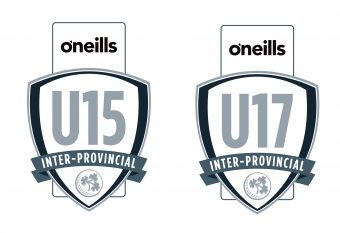 DUBLIN – Cricket Ireland today welcomed the support of leading Irish international sports company O’Neills as the title sponsor of the all-Ireland boys youth inter-provincial competitions that bring together players at under-15 and under-17 age groups from across Ireland to play in 50-over and T20 tournaments over a fortnight.

The four separate series within the youth inter-provincial competitions are:

“The week-long tournament format for Youth Inter-Provincials were introduced by Cricket Ireland in 2018, and is delivered in partnership with the provincial unions. Each age group plays in a week-long tournament that is split into a 50-over and T20 series (last year the 50-over and T20 match results were aggregated in one table to determine an overall winner, however this year there will be two trophies awarded to acknowledge each format separately).”

“The concept behind the Youth Inter-Provincials is to provide young cricketers with the opportunity to excel and develop their skills in a safe and enjoyable environment. The tournament represents a greater investment by Cricket Ireland into the youth structure and pathways for Provincial Unions, and supports the national talent pathway system.”

“In advance of this year’s tournament we would like to acknowledge the tournament host the Northern Cricket Union, their clubs and the match officials who will be standing and scoring for which will no doubt be an outstanding couple of weeks of cricket.”

All matches will be livescored and can be followed via www.mycricket.ie and through the MyCricket Ireland app.

“O’Neills Irish International Sports Company Ltd has been a proud partner of Cricket Ireland for the past seven years. Throughout this time we have seen the commitment and endeavour that Cricket Ireland have invested into the development of the game, at a youth level throughout the island of Ireland. It is hugely encouraging to see teams using the Youth Inter-Provincials as a competitive platform to gain valuable game time and develop their skills further.”

“As a company O’Neills have a fantastic reputation for supporting grassroots sport, and as such we are delighted to support youth players and their development through the sponsorship of this year’s edition of the Youth Inter-Provincials. We look forward to seeing some competitive games in the weeks ahead.”

“We are delighted to have our Official Kit Partner, O’Neills, broaden their sponsorship of Irish cricket to include the upcoming and strategically important youth Inter-Provincial series. This sponsorship reinforces O’Neills commitment to junior and grassroots cricket which is a natural extension of their recent decision to sponsor the Cricket Ireland Junior Membership Programme for 2019. I’d like to thank Kieran Kennedy and his team in O’Neill’s for their valued support for Irish cricket.”

The Under-15s week will be played from 1 – 5 July 2019 at Holywood Cricket Club and Campbell College (Download the Under-15s full fixture list).

NB: A number of fixtures have been played pre-Tournament week due to ground availability and logistics

Brían O’Rourke, Leinster Under-15s and Under-17s Manager said:
“The Leinster players and management are looking forward to the week’s cricket at both Campbell College and Holywood CC. These tournaments remain most important in the Union’s player development plans. Virtually all of the current Leinster Lightning squad have participated at these events over the past ten years and have clearly benefited as a result. We look forward to a competitive weeks cricket in Northern Ireland.”

Ruadhan Jones, Munster Under-15s Manager, said:
“The inter-pros are always a great opportunity to test yourself against the best of your peers. For all of them it will be their first taste of inter-pro cricket, so it will take to time to adjust to the standard. But we’ve a young side all keen to learn and challenge themselves and I’m looking forward to seeing how they respond.”

Ted Williamson, Munster Under-17s coach, said:
“For Munster, our re admission into the inter-pros, is a big step forward and the one of the missing pieces of the pathway for our younger lads. Our aim in the first couple of years is to hold our own, be as competitive as we possibly can and these days you never know once you take games deep. The group are tight and raring to go. It should be a great tournament for all involved.”

Callum Atkinson, Northern Cricket Union Under-15s Manager, said:
“After a long winter training indoors and working hard, our boys are excited for next week’s Inter-Pro Series. We’re looking forward to compete against the best under-15 cricketers in Ireland and test ourselves in both the 50 over and T20 competitions. The format of next week sees five matches played over four days with a rest day in the middle. For our boys to experience the challenges of competitive cricket for a week will be invaluable for their development as they aspire to play Senior Inter-Pro cricket in years to come.”

David Scanlon, North West Under-15s coach, said:
“We are really looking forward to the Under-15s tournament in Belfast this year. The boys are really eager for the first game against Leinster on Monday after an excellent win against the NCU Under-15s which sets us up nicely for the rest of the week. The tournament format gives the opportunity for each player to showcase their skills and perform alongside the best young cricketers in Ireland. I know they are all excited and raring to go after a productive winter training programme.”

Kevin Martin, North West Under-17s Head coach, said:
“After a very productive and hard-working winter programme, it’s a great chance for the boys to showcase their abilities. The coaching team thought the tournament last year was a great set-up, allowing plenty of playing opportunities for all the squad in the two formats. Both the playing and coaching group are looking forward to the week.”