Over 40 years of experience: Two Irish cricket legends to bow out against New Zealand 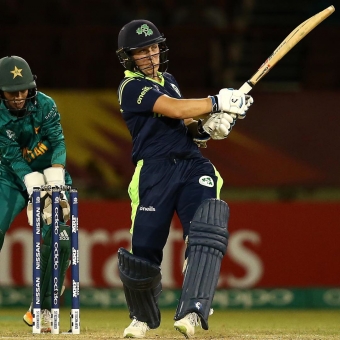 Clare Shillington and Ciara Metcalfe are retiring after the next match

GEORGETOWN – With more than 40 years of collective cricket experience between them, Clare Shillington and Ciara Metcalfe are about to take their final bow playing in the green – for both, the road has been a challenging one, but neither would change a thing.

With Ireland to play its final Group Match tomorrow (Saturday), the two players were having a quiet morning between games, prior to a training and gym session, and were in a reflective mood about their careers and hopes for the future of women’s cricket in Ireland.

“To be honest I’m trying not to think about the fact it’s my last game too much. I’m just trying to stay focussed on that we’re here to do a job. Obviously it would be nice for everyone, not just because it’s my last game, but for everyone to finish on a high and push New Zealand as far as we can.”

“I remember when I got my 100th cap I said it [cricket] was a love-hate relationship, but the good days by far outweigh the bad days. I don’t think you can ever not enjoy putting on an Irish shirt and representing your country.”

“But I think we’ve come so far, it’s really become an elite environment, the facilities we have for training are amazing. 21 years is a long time - I was 16 when I started – so a lot has changed.”

When asked about the next step in her career, she said:

“To be a pro-golfer! No, seriously, the next step is coaching. It’s part of easing the pain of retiring is knowing you’ll still be around the set up. I’m a coach in Pembroke and I hope to stay on even do a bit of coaching in Cricket Ireland. I’m hoping to not be too far away from the game and hoping to help the next crop of young players come through. Maybe I can be a mentor as well as a coach.”

And on the future of Irish women’s cricket?

“The current squad is looking good. Obviously we have Ciara and I retiring after the next game, we’ve been around for a long time, but there are already new players coming through pushing us out - the way things are going I think we might have been pushed out soon enough anyway.”

“I do think it’s looking good, but I do think we need to expand what we’re doing at home, and we need to grow the game as much as we can. I think that is happening but we need to do it at a faster rate. But I think the immediate future is good, we have some younger players who have been in the system for a while, and they’re ready to come up and take those spots that are now free.”

About retiring at the same time as her friend Ciara Metcalfe:

“I’m happy to be taking the pitch for the last time with her and glad I can share that day with her. We first played together at Malahide 24 years ago, so obviously we’ve come through a lot together. It will be a special day - it will be sad, but nice to be doing it with Ciara and nice to have my mum who will be there and my partner, it will be nice to have friends and family around.” Dublin-born leg-spinner Ciara Metcalfe, who debuted in 1999 for Ireland, said:

“As a team we’re doing a little bit better each game and there is still lots to get out of this tournament. As for retiring, I’m really excited and a little bit sad but I’m trying to get through the game first and then I’ll deal with all the emotions of it.”

Asked about her career, she said:

“It’s been eventful - I’ve definitely done it my way. It hasn’t been plain sailing. It’s been up and down, I’ve been in the team and out of the team, fit and not fit, in form and out of form, but I wouldn’t change one minute of it. I’ve enjoyed it, it has been life changing, I’ve travelled the world and made some great friends. It’s been a great journey.”

In July this year, Metcalfe claimed her 100th international wicket.

“That was amazing - it was a long time coming. Again, I suppose I’ve had a colourful career. I haven’t reached some of the milestones that some of the other girls have, so that was definitely one of my things to knock off, and it was fantastic.

As for the future?

“Coaching. I’m over in Australia and I’m learning my trade there and moving onto my Level 3 Performance Coaching, then hopefully go on from there and take charge of a couple of teams.”

And when asked about the future of Irish women’s cricket, she said:

“The current squad is a great bunch, there’s lots happening and there’s lots of positives. These guys are working hard and it’s changing, Irish cricket is changing for the better.”

“We’re as professional as we can be for an amateur side, and with regards to contracts I think that is going to happen. I think will only benefit cricket - both men’s and women’s cricket - it’d be a good investment. I think you’ll see we’re only a few runs short of competing with these top teams. The men aren’t going to jump up to number 6 on the rankings anytime soon, but the women could it and that would have a great knock-on effect for both.”

“The main challenge is keeping people in the game, advancing the coaching at the grass roots level, which I think they are doing - Cricket Leinster for example are doing a great job at this. Overall cricket in Ireland is changing, it’s becoming more professional and we’ve investing more and it will get there. It’s like when you’re a coach and you’re waiting for people to grow up and hit a certain age and talent within the game, and it’s the same with our domestic system, it will come but it may be years before we see it.”

The clash between Ireland and New Zealand is on Saturday 17 November 2018, 4pm start (local time) or 8pm GMT. The match will be broadcast on Sky Sports in Ireland / UK.