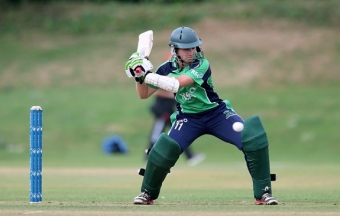 Ireland’s Women cricketers slumped to a seven wicket defeat by Pakistan in Doha after a poor batting display saw them skittled for just 92.

Clare Shillington scored a breezy 20 from 28 balls (2 fours), but her dismissal saw Ireland collapse from 31 for 1 to 57 for 8, with Sana Mir (3-11) taking three wickets in the space of five balls.

It was left to skipper Isobel Joyce with an unbeaten 36 to try and nurse the Ireland tail to a respectable total. Joyce hit two boundaries in her 105 ball vigil, but in truth, it was only delaying the inevitable.

Sadia Yousuf (2-11) also bowled well in an impressive Pakistan bowling display, in which their attack never relinquished their stranglehold on the contest.

Opener Javeria Khan steered her team to the seven wicket win with an unbeaten 51 from 86 balls, as they passed their modest target with 24 overs to spare.

There was some good news for the Irish, with 16 year-old leg-spinner Elena Tice showing her undoubted talent, having the excellent analysis of 3 for 31.

Skipper Joyce admitted that it’s been quite a struggle for the young Irish side saying: “It’s very tough going out in the middle, with a huge amount of turn and not much value for shots with the slow outfield.” Only six boundaries were scored in the two innings.

“Our fielding has shown a great improvement and a bright spot has been Elena Tice’s performances with the ball in both games. Clare Shillington has looked comfortable with the bat too.

“We’ll be looking for more people to contribute with the bat against South Africa and to dig in a bit more. In these tough conditions it’s about rethinking our targets and finding new ways to score.”

It’s been a real baptism of fire for new coach Trent Johnston, who is remaining upbeat despite two heavy losses. “It’s been a tough start for the players but there have been encouraging signs. Elena Tice bowled superbly and fully deserved her three wickets. The players all showed great energy and fight in the field despite defending a low total.

“It’s a steep learning curve for the squad but they will learn lessons and improve from these defeats. These matches will stand us in good stead ahead of the T20 World Cup in Bangladesh. We’ve another big game against South Africa coming up tomorrow, so it’s a chance for the team to get this game out of their system right away.”