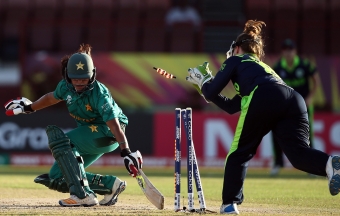 Ireland Women’s cricket team have fallen to a second defeat at the Women’s World T20 tournament after a 38-run loss to Pakistan at the National Stadium in Guyana today.

Prior to play there was a special moment as captain Laura Delany presented a debut cap to Celeste Raack. The 24-year old Australian-born legspinner has only recently declared for Ireland and, after a season of Toyota Super 3’s cricket under her belt, decided her international destiny lay with the nation of her grandmother’s birthplace. Raack replaced Cecelia Joyce from the team that lost to Australia on Sunday.

Pakistan captain Javeria Khan won the toss and chose to bat first in hot and humid conditions. Early on the decision to bat first looked to backfire, with an early wicket and good tight bowling by Ireland’s attack held the Pakistan innings in check.

The first wicket of the innings fell to the experienced leg-spinner Ciara Metcalfe (1-16) who bowled with flight and turn, and conceded just six runs in her opening two overs. Replacing Metcalfe after her opening spell was the debutant Raack, who almost caused a sensation by taking a wicket with her first ball. The stumping chance was eventually turned down on review.

While the opening six overs belonged to the Irish bowlers, the next 13 belonged to Pakistan. Led by their skipper Javeria Khan (74* from 52 balls; 11 x fours) the Pakistan side dug their way out of trouble and posted a competitive total of 139-6. The final over, bowled by Lucy O’Reilly (3-19), produced three wickets as the Irish side went into the break with a challenging total to chase.

Requiring a solid start, Ireland lost stand-in opener Gaby Lewis for 2, however, replays showed that the Pakistan keeper Sidra Nawaz may have collected the ball before it had fully passed the wicket, meaning Lewis was potentially unlucky in her dismissal.

Clare Shillington decided to take the opposition on and compiled a promising 27 runs (25 balls; 5 x fours) until she played across the line and was bowled.

Isobel Joyce (30 runs from 31 balls; 4 x fours) then tried to take the senior batting role to steer the innings, but Ireland lost regular wickets and the run rate required grew until it became insurmountable for the lower order batters.

The squad now has a rest day before facing India on Thursday.