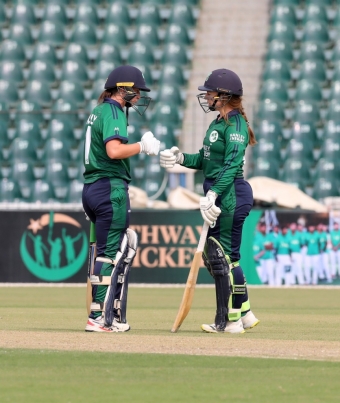 LAHORE, Pakistan – Pakistan opener Sidra Ameen once again played a key hand as the home side took an unassailable 2-0 lead in the best-of-three ODI series with a nine-wicket victory over Ireland today.

Ireland captain Laura Delany won the toss and opted to bat on a flat pitch, however, an excellent delivery from Fatima Sana left Ireland a wicket down before registering a run on the scoreboard, Leah Paul bowled through the gate.

Amy Hunter came in and showed positive intent straight away, smashing three fours off Kainat Imtiaz’s first over. It was looking like a promising rebuilding effort from Hunter and Gaby Lewis as they put on 26 off the first five overs, but Lewis was unfortunately run out off the first ball of the sixth over by a direct hit from Aliya Riaz.

From there, the wickets came in a steady flow for Ireland. Hunter was dismissed for a 35-ball 30, charging down the wicket looking to hit Nashra Sandhu over deep mid-wicket but picking out a jumping Bismah Maroof. A fighting partnership by Delany and Orla Prendergast put on 42 before Prendergast, showing the same aggression she did in the last ODI, gave Riaz a catch at long off.

Delany edged a ball from Ghulam Fatima through to the keeper a couple of overs later before Eimear Richardson and Rachel Delaney were dismissed by Sandhu off consecutive deliveries.

Arlene Kelly and Mary Waldron then combined to score the highest-ever eighth-wicket partnership for Ireland in a women’s ODI. They compiled 59 runs between them before Waldron top-edged a sweep shot which fell into Sidra Nawaz’s gloves. Kelly went on to post a career-best ODI score of 34 before she was run out by Nida Dar.

Reviewing the game afterwards, Ireland may come to rue the fact that six batters got starts – scoring between 23 and 35 – but none went on to make a substantial contribution, and the visitors were bowled out for 194 with 2.4 overs remaining.

Ireland faced a tough task to register their first win of the tour, with Pakistan openers Sidra Ameen and Muneeba Ali both coming in off the back of centuries in the first ODI. They continued where they left off in the last match, calmly knocking off 52 runs in the first ten overs of the chase.

However, Richardson made the breakthrough in her first over, dismissing Ali for 27 but at 59-1 Pakistan were already well on their way.

Ireland’s bowling unit toiled hard in the challenging conditions, but from there on in, Maroof and Ameen put on a show of high-class batting, controlling the game with a partnership scored at close to a run a ball to see Pakistan home with more than 17 overs to spare.

The final match of the ODI series will take place on Wednesday 9 November, at the Gaddafi Stadium in Lahore at 9.30am local time (4.30 Irish time).

* the ODIs are part of the ICC Women’s Championship