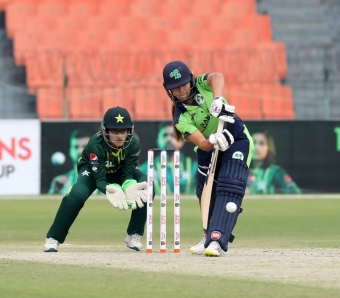 LAHORE – Ireland Women were edged out a tight run chase in the rain-shortened second T20I at the Gaddafi Stadium in Lahore, as Pakistan levelled the series ahead of the final match on Wednesday.

An excellent performance behind the stumps by wicketkeeper Mary Waldron and an impressive innings by opener Amy Hunter weren’t enough to drag Ireland over the line for a series win today.

There was wet weather around in the morning in Lahore and after a delay to the start of play the match was shortened to 17 overs a side, Ireland fielding an unchanged XI from their historic win in the first match of the series.

Ireland got off to a good start scoring 10 runs from the first over. While Gaby Lewis was bowled in the third over, Hunter and Orla Prendergast set about building a solid total.

They took two boundaries off Sana’s third over and boosted the run rate to almost six an over before Prendergast was dismissed by Nashra Sandhu in the ninth over. Prendergast had been looking to get to the pitch of the ball to counter the sharp turn off the surface but missed a shorter delivery from Sandhu giving Muneeba Ali a stumping opportunity.

Hunter continued to anchor the innings, lifting Ireland to 78 off 13 overs before she was also stumped advancing down the wicket to Omaima Sohail. Despite that, the 14th over was a profitable one for Ireland, Sohail bowling 12 deliveries and Ireland taking 15 runs from it. An aggressive cameo of 15 off nine from Eimear Richardson and a boundary off the last ball from Rebecca Stokell countered a late flurry of wickets, Ireland finishing on 118-7. On a pitch that had a lot in it for the spinners, it looked like a competitive total.

Needing just under seven an over, Pakistan made a fast start, scoring 26 off the first three overs including two boundaries off Prendergast.

A loose cut shot off Arlene Kelly from Muneeba in the following over, saw Jane Maguire take the catch for the first wicket. Five balls later, Kelly made it two in the over, Mary Waldron claiming a brilliant stumping - whipping the bails off before Maroof could slide her bat back in after dithering over taking a quick single.

With Ireland having just taken two wickets for three runs, Nida Dar and Javeria Khan sought to wrestle back control of the run chase and build a solid partnership.

Pakistan looked on course for victory at 74-2 - needing another 45 off 36 balls - when Waldron made two decisive interventions behind the stumps. First, she picked up a good throw from Stokell in the deep with Javeria slowing down on the second run, taking the bails off with the batter just short of her ground, breaking the partnership.

Second, she removed Dar, collecting a flat throw from Hunter and removing the bails with Dar just short of her ground. That left Pakistan needing 22 off 17 balls and the game in the balance.

However a mis-field conceded a boundary where only one should have been scored, reducing the equation to less than a run a ball for Pakistan. A four and a six from Naseem off the last two balls of the penultimate over gave Pakistan a series-equalling victory. Her 25 off just 12 balls crucial in the victory.

Despite fighting hard, the visitors must now turn their minds to the third match of the series on Wednesday to record a potential historic series win.