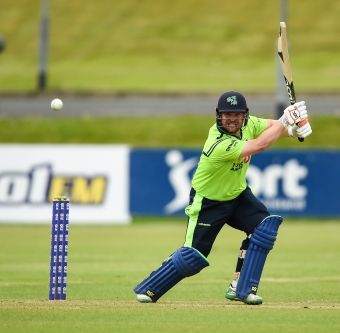 LONDON – Ireland international Paul Stirling has today announced he has signed a new contract with Cricket Ireland and will leave Middlesex at the end of the English county season.

“It’s been a real privilege to represent Middlesex Cricket over the last decade, and it has been an unforgettable journey for many reasons. Winning the Championship in 2016 was undoubtedly the highlight on the field, while also receiving my county cap will be something I will cherish for a very long time.”

“However, it was the relationships built with the players, staff and supporters that was the most rewarding, and that I will miss the most. I would like to thank everyone I’ve met along the way at the club for their support over the years and wish Middlesex all the success in the coming years.”

“I am looking forward to the next chapter with Ireland, with the a busy year in 2020 and the T20 World Cup Qualifier coming up it is an exciting time to be a part of.”

“We are delighted that Paul has committed his long-term future to Ireland, although appreciate it must be a bittersweet moment for him leaving Middlesex. He is a model professional and key member of our international squad in all three formats. His experience and approach to the game is invaluable both on the pitch as a senior pro and consistent performer, and in the dressing room with the emerging players coming through.”

“We would like to thank Angus Fraser and the Middlesex hierarchy for such a positive working relationship with Cricket Ireland regarding Paul’s, and other Irish players’ development over the years. Middlesex’s proactive and cooperative approach has ensured we could all work together to develop Paul as a cricketer and manage his Paul’s progress and availability for international duties over the years.”

“From a selfish and Middlesex point of view it is obviously sad to see Paul leave. His aggressive and destructive batting has thrilled Middlesex players and supporters for a number of years. There have been many Middlesex cricketers that have scored more runs than Paul but very few have played innings as memorable. I will never forget the afternoon he and Eoin Morgan scored hundreds against Lancashire as Middlesex smashed 350 in a 40 over game. I have seen very few players strike the ball like him and he has been a joy to work with.”

“The Middlesex coaches and myself totally understand Paul’s decision. It has not been an easy one and I know he has thought about it long and hard. Playing for your country is something that should never be taken for granted. It is an honour and a privilege, and to finish a career with regrets is something nobody wants to do.”

“Everyone at Middlesex fully respects Paul’s decision and we hope he achieves all that he wants with Ireland. He will always be welcome at Lord’s and if he ever feels like coming back to play for us in any capacity he has my phone number.”

Prior to 2020 Ireland cricketers were allowed to freely play county cricket in England and Wales, but the regulations changed in June 2017 when Ireland were granted Test status by the International Cricket Council. To avoid potential legal complications and in order to allow pre-existing contracts to be honoured the England and Wales Cricket Board gave counties and Ireland cricketers two years leniency. This period - the 2018 and 2019 domestic cricket seasons - finishes at the end of the current season.

Since making his Middlesex 1st XI debut in 2010 Stirling has played almost 200 games and scored more than 6,000 runs for the club. Forty two of these games were 1st Class yet it has been in white ball cricket where he had the biggest impact. Opening the batting Stirling scored eight List A hundreds and averaged more than 43. He played shots and innings that very few Middlesex cricketers have, and in T20 he averaged 26 with a strike rate of over 142. Stirling’s wily off-spin claimed 62 wickets too.