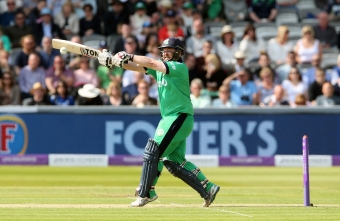 Paul Stirling in action against England at Lord's in May

Cricket Ireland have clarified the situation regarding Paul Stirling’s exclusion from this week’s ICC InterContinental Cup match against The Netherlands at Malahide.

A Cricket Ireland spokesperson said: “Paul Stirling is progressing well from his recent calf injury and as a result his late stage rehabilitation and graduated return to play meant he was able to play in Middlesex’s Natwest T20 Blast matches last week.

“It was felt that the demands and rigours of four-day cricket at this important stage of his recovery could put him at a greater risk of a recurrence of his injury, and therefore remains omitted from Ireland’s squad.

“It is hoped he will build up his workloads over the coming weeks and return to full fitness for all formats.  Having had three days recovery, he is also likely to play in Middlesex’s T20 fixture against Gloucestershire on Tuesday.

“Cricket Ireland have been in regular contact with Middlesex during Paul’s injury, and both parties are in agreement that this path represents the best method for him to make a full recovery as quickly as possible, diminishing any chances of a set-back.”

Play at Malahide gets under way on Tuesday at 11am, and there is free entry for all spectators.