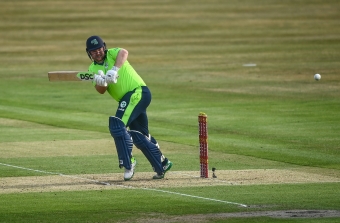 DUBLIN – Ireland’s Paul Stirling has been granted clearance by Cricket Ireland to play in the remainder of The Hundred for Southern Brave, which could see his first appearance in the new format tomorrow.

This will be Stirling’s second move to England this season, after his five-match stint with Middlesex in the Vitality Blast in May.

The move was agreed after Cricket Ireland signed a No Objection Certificate today, permitting the player’s immediate move to the current unbeaten competition leaders. The Southern Brave’s next match is scheduled to be against the Manchester Originals at the Emirates Old Trafford tomorrow.

“I’ve watched the first few rounds of The Hundred with great interest and am delighted to have been given this chance to be involved. The Southern Brave team has been outstanding so far under James Vince, and I hope I can contribute to the ongoing success of the team in this inaugural season of the competition. As a new concept, it’s been great to see the fans turning out to support The Hundred and it’ll be great to play in front of big crowds once more.”

“We’re pleased for Paul to have this opportunity to compete in such a high quality competitive environment. With the rescheduling of the Ireland Men’s Zimbabwe series, this gap in the calendar has opened up an opportunity that we were only too happy to help facilitate.”

“With the T20 World Cup approaching, the opportunity for one of our leading players to have an experience like this can only be beneficial. We’d like to thank the management team at the Southern Brave for working so efficiently to make this happen.”

Stirling’s Southern Brave’s team has four fixtures to play before a potential appearance in The Eliminator and/or The Final, which is set to be played at Lord’s on 21 August 2021.

More on the competition: www.thehundred.com