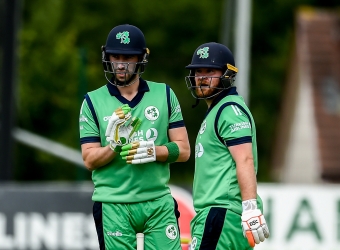 Balbirnie and Stirling batting against Zimbabwe in 2019

Stirling made his international debut for Ireland in 2008, and has appeared 282 times for the national side (currently the fourth-highest number of caps for Ireland). He has amassed 8,821 runs across all formats (Ireland’s second-highest run-scorer of all-time) and taken 101 wickets. In 2019, Stirling stood in as acting Ireland captain for six T20 Internationals.

“I’ve known Paul since I was about 12 years old when we first played against each other in inter-provincial cricket – we’ve grown up together in our careers as such. We both went to Middlesex at the same time and lived together over in London, so he’s someone I consider a very close mate but also a very valuable person to have in our side from a knowledge point of view. So I didn’t really hesitate when I was thinking about who could be my vice-captain – he stuck out to me straight away.”

“I first mentioned the idea to him in the Caribbean and he said he’d love to do it. He’s someone that I’ve always sought advice from when thinking about my batting, so to have him as my right-hand man over the next few years is really exciting and one I’m sure he’s excited for as well.”

“I think within the Irish squad we have a lot of experienced guys to be able to voice their opinion, but at the end of the day, it is my decision. To have different points of view is great and refreshing, but with someone like Paul he is someone I’d talk to a lot about the game – it’s exciting for the next phase of the squad we’re bringing through. Even for the young players, to have someone like Paul to have a chat to in the change room or at training, he’s valuable to us both on the field and off.” Image: Stirling and Balbirnie walking off after another century partnership

“It was fitting to get a call from Bal [Andrew Balbirnie] to ask me to be his vice-captain. We’ve played together all the way up from when we were kids so I look forward to helping him shape the way this Irish side moves forward in the coming months and years ahead.”

“He’s had an excellent start to his captaincy with wins in the Caribbean and the sub-continent, but there is so much on your plate as captain - especially with a younger team than we’ve had in the past - so I am happy just to be a sounding board to bounce ideas off and help implement any changes in the way Bal wants to take this team forward on and off the field.”

Asked about how he had fared during the lockdown, Stirling said:

“I think this break from cricket has affected each individual differently. From a personal point of view, I believe it’s given me an opportunity to take a break from the mental side of the game, having been an all-year-round cricketer since the beginning of my career I think it’s a real silver lining.”

“On the flip side of that, you never want to have an extended break when you’re in your prime batting years so I’m hopeful I can get back into match sharpness and previous form straight away. I’ve kept in touch with all the coaching staff on a regular basis - but now it’s time for less theories and more action!”

“Away from cricket has been a mix of online courses, books and complete failures in building flat-pack furniture. All in all, in golfing lingo, I think I’ve come out of lockdown on even par.”

The Ireland Men’s team returned to training last week with discussions still underway over the possibility of the team playing three one-day internationals against England at the end of July. If the matches proceed, they will be Ireland’s first fixtures as part of the new ICC World Cup Super League, essentially world cup qualifiers for the 2023 Cricket World Cup.