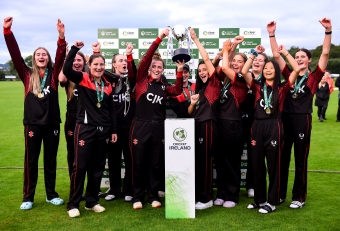 Captain Mary Waldron led the side home with a professional display scoring 22* from 23 balls, while her opening partner Louise Little’ cameo knock of 19 from 14 balls broke the back of the run-chase.

In a match that was reduced to 10 overs-a-side due to earlier rainfall, the Bready side posted 50-8 from their 10 overs in damp conditions that were hard to score freely. As in the semi-final Bready skipper Alana Dalzell led the way with the bat, striking back-to-back boundaries at one point – however on 14 she was deceived by a ball from Mhairi Nichol and Waldron quickly removed the bails to complete the stumping.

While there were flashes of attacking play from Jemma Rankin and Kathryn Rough, no other Bready batter could sustain an assault on the tight and disciplined bowling from the star-studded Pembroke which featured 5 current or former internationals in its playing XI.

Aware that low run-chases in such conditions can be tricky, Waldron and Little set about scoring fast – their 32-run opening stand came from just 23 balls, and featured an enormous six struck by Little over deep long on.

Little was the only wicket to fall – courtesy of some quick thinking behind the stumps by Amy Campbell that saw Little caught out of her crease – but the seemingly inevitable result came a few overs later when Waldron hit a four and a two to register a 9-wicket win by her Dublin-based side.

In the semi-final earlier in the day, hosts Bready pulled off a thrilling 11-run (DLS) win over the more-fancied CSNI side from Belfast, led to victory by their star captain Alana Dalzell.

Dalzell carried her bat through the Bready innings, finishing on 47* from 66 balls, looking in fine touch on a tricky pitch that saw only one other of her batting partners reach double figures. She powered three boundaries through a damp outfield, but more importantly held her side together through several tricky rain-breaks and a middle-order collapse that saw Bready lose 4-6 in the space of two overs.

Kathryn Rough (14) was the only other Bready batter who seemed to get to grips with the slow pitch – and after 20 overs the home side finished on what looked a competitive total of 105-8.

CSNI started in the manner they would not have wanted, losing their skipper Rachael Thomas for 0 on the second ball, but then the rains came again for a lengthy period which eventually saw eight overs lost, with a revised DLS target of 74 announced. After an initial flourish from Ali Cowan (18 from 16 balls), the wickets began to tumble – not aided in the run chase by three run outs.

Dalzell then came to the fore with the ball claiming 2-8 from two overs as her Bready side closed in on an unexpected victory.

A remarkable bowling cameo at the end saw 11-year old Mansie Bhavsar given the ball at the death and finished with 2-1 off her single over, showing immense calmness and maturity with CSNI pushing for a late win.

A moment of humour towards the back end of the match has gone truly ‘viral’ online when a dog escaped from his owner in the crowd, ran onto the field, and, well – watch below. The video has been viewed over half-a-million times on Twitter alone at time of release.