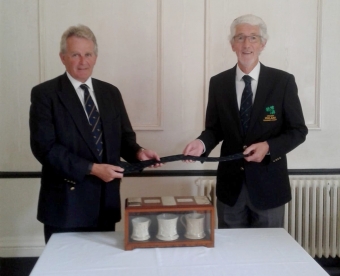 DUBLIN – Philip Black has been formally announced as the new President of Cricket Ireland following the organisation’s first ‘virtual’ Annual General Meeting held yesterday via video-conferencing. Following a change to the Cricket Ireland Constitution to mitigate extraordinary circumstances such as the current pandemic, the members also voted for Mr Black’s term to extend to the AGM in 2022.

Mr Black has a long involvement in Irish cricket, including being Treasurer of the Irish Cricket Union (ICU), and being part of the team that led the incorporation process of ICU Ltd. He has also been part of the Cricket Ireland Finance Committee for the last 14 years, a period during which annual revenues have increased from €400K to €10M.

He succeeds outgoing President David O’Connor who steps down after an exciting period during which Ireland Men played their first Test match against England at Lord’s, Ireland Men qualified for the T20 World Cup, and Ireland Women finished third at the T20 World Cup Qualifier, narrowly missing out on the main tournament.

On being approved as the new President, Mr Black said:

“It is a great honour to become President, particularly to think of some of those that have preceded me. While the role is largely honorary, you are an ambassador for your country - meeting and greeting people whether home or away. It’s not only a proud day for my family and I, but for my club as well. The last president from CSNI Cricket Club was Simon Corlett, one of Ireland’s finest cricketers.”

“Coming into the role, I was only thinking back the other day at the first Irish international match I saw - it was at Castle Avenue in September 1966. Ireland played a three-day game against the MCC, and while we lost a low-scoring match in poor weather, I can distinctly remember admiring the outstanding Alec O’Riordan who claimed eight wickets. But I have to say that my most memorable Irish cricket experience was to be in Bangalore in 2011 to see us beat England and Kevin O’Brien score the fastest World Cup century. When Ireland were 110-5, my travelling partner said to me ‘let’s head for the bright lights of Bangalore’. Fortunately, I said to hold on - what a good decision that was!”

“While my older brother played, and is still associated with Phoenix CC, my own playing days began at age nine in Monkstown, Co Dublin, but I didn’t really get involved with club cricket until I joined Pembroke CC in 1974, and then North of Ireland CC in 1979 - which ultimately became CSNI CC in later years.”

“With three boys, I have been involved in coaching for many years, and can proudly claim that I played with Gary Wilson when he was a schoolboy at Ormeau - so I have seen his development throughout his career. We at CSNI were, of course, delighted when Gary returned to the club after his county career. He is now our Director of Cricket, and an outstanding role model for younger kids today.”

The AGM ‘attendees’ acknowledged the work of outgoing President David O’Connor, recognising the unfortunate circumstance that the final few months of his Presidency coincided with the COVID-19 pandemic.

Mr O’Connor thanked the Members for the opportunity over the last year:

“I was delighted to have been asked to be President and it was certainly an eye-opener to see the amount of work being done by our Chairman Ross McCollum, his hardworking Board of Directors and the staff in Head Office. As they say: ‘A lot done, a lot more to do’.”

“I very much enjoyed supporting all of our national teams, whether home or away, and seeing the dedication being put in by the players and coaches behind-the-scenes. I tried to also get to different clubs around Ireland over the year, but sadly my opportunities were cut short this year, which is a pity as I had hoped to visit particularly some of the new and emerging clubs that have started up in recent years.”

“Certainly a major highlight personally was the first two days of the Lord’s Test – it was unforgettable. As was meeting Sir Garfield Sobers and the now sadly passed Sir Everton Weekes.”

“But the main insight the role has given me was that while Ireland are now at the top table of world cricket, we still have to fight our corner, and continue to support those who are also on the way up. We have a mountain of work to do in order to fund and grow Irish cricket, and while the organisation is heading in the right direction, we are now – in a business sense - a SME and we need to develop the structures to continue this work.”

“Incoming President Philip Black is coming in at a strange time, but I know he is well capable of dealing with all that will face him. I do hope that Helen and he will enjoy the role as much as Breege and I did.”

“David has been very good company over the last year, working tirelessly throughout and fulfilling the duties of the role efficiently and with great spirit. On behalf of the Board and Members, I would like to thank David for his service to the sport over these last 15 months – he’s been a great ambassador for cricket and we hope he won’t be a stranger around the grounds over coming years.”

Mr McCollum spoke about the change of term length of the incoming President:

“Given the extraordinary circumstances we are living through and the loss of an entire home international season, the Members at the AGM also approved a motion to allow for the extension of a President’s tenure beyond the traditional term limit of 12 months. With the next AGM due in April 2021, there was a good chance that the incoming President would see little to no international cricket activity. As such, the Members voted unanimously to allow for the incoming President’s term to be extended through to April 2022.”

Mr McCollum also praised the work and dedication of the two outgoing Board Directors – Bill Cunningham and Alan Waite:

“Today also marks a major change for the Board as two longstanding Directors step down. Bill and Alan have both provided immense support and guidance for the Board and organisation as a whole. Few people will be aware of the time and commitment they both gave to their work, and for that we say thank you.”

“The span of Bill’s and Alan’s involvement with the Board and various subcommittees crosses from the Associate to Full Member era, during a period of great change and growth. Such voluntary commitment at Board level, as displayed by Bill and Alan, exemplifies why Cricket Ireland is where it is today – at the top table of the world’s second largest sport and growing year-on-year as a sport. We wish them well and are pleased that they will continue to stay within the sport, lending their expertise for the benefit of Irish cricket.”

Other approved outcomes and adopted reports from the AGM included:

• David Griffin, current Chair of Munster Cricket Union, was approved as Cricket Ireland Vice-President;
• the finance report showed an improved financial position for the organisation - from running a €203K deficit in 2018 to finishing with a €10K deficit in 2019 – this despite two significant negative financial impacts of a contracted broadcaster going into administration (€275K loss) and a cybercrime theft (€175K loss);
• the Cricket Ireland Annual Report 2019 was adopted; and
• two new Board Directors – Brian MacNeice and Peter McMorran - were approved to replace the outgoing Bill Cunningham and Alan Waite.