Porterfield calls for Ireland to be added to Future Tours Programme 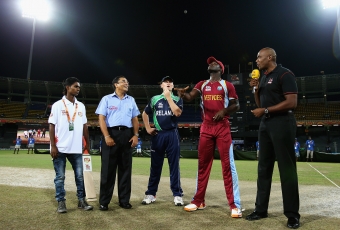 William Porterfield made an impassioned plea for more matches for his team between major international tournaments, saying the only way Ireland could get better was to play regularly against the full members of the International Cricket Council.

“The Board has obviously set out a strategic plan in terms of wanting to be a Test nation by 2020,” said Porterfield after his team crashed out of the ICC World Twenty20 2012 following a washout against the West Indies. “As far as I am concerned, it’s a very achievable goal in terms of how far we have come in the last six-seven years. For myself personally, in the next 4-5 years, I’d like to see us on the Future Tours Programme. It’s fine to give us one-dayers and Twenty20 Internationals, but when Test nations come to England, we should be able to join in and also get a few tours in the winter to full member countries.”

“We should be playing more regularly,” said Porterfield. “Especially in this format as well because there is a lot of cricket played in this format. Getting to play the bigger teams, the full member teams, in this format, is going to be the key to keep developing in the one-day game. Test cricket is the ultimate goal but a lot of steps have to be taken before we can get to that stage. Getting on the Future Tours Programme will give us guaranteed fixtures over a couple of years’ period. We will know exactly what we are doing and what we are preparing for as opposed to now going back home and actually not playing cricket again as a squad until March. That’s a long break for an international side to have. We would love a few tours to come up in the meantime as well. At the moment we can’t plan for that, we have to take what comes our way. The Board’s grovelling for that, but as a nation, we can’t really plan that far ahead.”

Ireland was eliminated on net run rate after Monday’s match was abandoned, but Porterfield was gracious. “It would obviously have been a massive challenge,” said Porterfield of having to defend 129 for 6 in a match reduced to 19 overs-a-side before the rains came. “But you never know. We would rather go out of a tournament having two defeats as opposed to not knowing. It’s obviously disappointing to go out like thus, but there’s not a lot we can do. We played six months back in England this summer and we had as much rain as anything else. It’s just been a frustrating year in terms of the weather. Obviously when you come into a big tournament like this, you don’t want the weather to play a part but it is not in anyone’s control. It’s just one of those things.”

“In this format of the tournament, you got four groups of three teams and in order to advance, you have to win at least win one game and we didn’t,” added Porterfield. “We didn’t start very well against Australia. We only got half a game today. But I don’t think anyone will take us lightly coming into any tournament. I think they will be stupid to do so. The biggest thing for us is to keep playing more matches between tournaments.”

Porterfield picked Australia and the West Indies as teams to look out for in this competition. “The two teams that came through from this group will be favourites,” said Porterfield. “You look at what the West Indies have in terms of the power-hitting all the way down the order and they have got (Sunil) Narine as well. He is the key for them. They have got (Samuel) Badree (the leg-spinner) as well who is not playing and they have got a few part-time spinners. I think the further this tournament goes on, spin is going to play a big part, especially as the wickets get used. Whoever has a strong batting line-up and the mystery of spin in their side could be dangerous.”