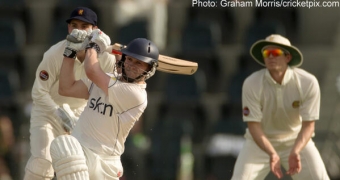 Ireland captain William Porterfield continued his dream start to 2013 with another century, this time for Warwickshire in the curtain raiser for the English domestic season in Abu Dhabi.

Warwickshire dominated the first day of the day-night Champion County match against the MCC at the Zayeed stadium in Abu Dhabi.  Varun Chopra and William Porterfield shared in a second wicket stand of 308 with both batsmen passing 150.  The Bears closed the day on 370 for 3.

After Jim Troughton had won the toss Warwickshire made an uneasy start.  In the second over without a run on the board Ian Westwood mis-judged an attempted pull shot off Peter Trego’s bowling and gave an easy catch to Simon Kerrigan at mid-wicket. Chopra played and missed at a couple as opening bowlers Trego and Steve Kirby got a little bit of life out of the pink ball.

But the batsmen soon got on top and looked increasingly comfortable.  They took full advantage of some wayward bowling from spinners Kerrigan and James Middlebrook.  By lunch they had completed a century stand taking the score to 116 for 1.

The middle session proved wicket-less for the MCC bowlers as the batsmen looked untroubled.  Porterfield survived a slip chance on 60 but that was the only opportunity either of them gave.  Chopra was the first to his century with a cover drive for two.  He then helped Porterfield reach a hundred by sprinting a third run after the Ireland captain had looked a touch nervous approaching the landmark.  It was his maiden first class century for Warwickshire.

The pair continued to plunder runs batting through the potentially difficult twilight period as the lights began to kick in.  They took the Bears to 262 for 1 by tea.

It was a surprise when both batsmen were eventually out in the final session of the day.  Chopra couldn’t disguise his anger at himself when he drove Kerrigan straight to Steve Kirby at mid-off to go for 163.  Porterfield was out for 162, the victim of a good catch in the covers by Kerrigan off Durham’s Chris Rushworth.

A patient Laurie Evans, who’s on 15, and Jim Troughton, 8 not out, saw off an hour of the new ball to leave Warwickshire aiming for a huge total when they resume on the second day.