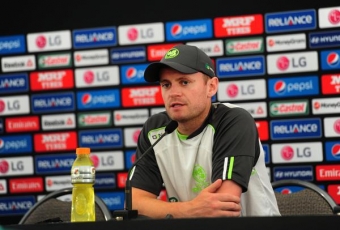 Following Saturday’s dramatic win over Zimbabwe, Ireland captain William Porterfield previews his sides clash with defending champions India at Hamilton which gets underway on www.cricketireland.ie at 1am GMT on Tuesday.

listen to ‘Ireland captain William Porterfield previews the game against India.’ on audioBoom

Q. William, the squad in a good place after three wins out of four so far?
WILLIAM PORTERFIELD: Yeah, they are. They’ve been pretty good with the count, and obviously winning helps that, so yeah, being three from four is a nice position to be in.

Q. Obviously World Champions are your toughest challenge, is it?
WILLIAM PORTERFIELD: Yeah, every next game is our toughest game. But it happens to be India, so yeah, next challenge is the one we’re looking forward to. So we’re in a good place now, so, yeah, we’ve just got to bring that form into tomorrow.

Q. William, you must be glad that you’ve got two matches left and you’ve got two chances to qualify for the quarterfinals?
WILLIAM PORTERFIELD: Yeah, well, obviously our next game, as I said before, is our next challenge, it’s the next chance we’ve got for two points up for grabs. So like any other game we’re going into it looking for a win, and we’re looking to make it four out of five tomorrow.

Q. Looking ahead at India and the way they’ve been playing, what do you think is your best chance at beating them? What areas are you targeting?
WILLIAM PORTERFIELD: Look, obviously, we’ve got to try to restrict them with the ball and take wickets. It’s just like any game of cricket and this format is the best way of restricting teams is taking those wickets. So we’ve got to go out there with that mentality throughout the 50 overs of taking wickets. Whatever we do first of the first ten overs is going to be big, if that’s what it’s with the bat or with the ball, we have to start the game well and get into it.

Q. Knowing you’re one point away from the quarterfinals, is that hugely exciting for the team at this moment?
WILLIAM PORTERFIELD: Yeah, it’s a nice position to be in. It’s one we want to be in the quarterfinals is a goal we set ourselves before we came here, so we’re in, as I said, a nice position now, but it doesn’t count for anything if we don’t keep getting good performances and the start of the game tomorrow.

Q. In terms of the stage that you’re playing on tomorrow, because India is probably your biggest opponent in this group, are you approaching it as any other game or are you looking to make a statement against one of the big three teams?
WILLIAM PORTERFIELD: No, it’s like any other game. We’ve gotten into each game with two points up for grabs, and tomorrow isn’t any different. We’ve approached each game with great clarity and great professionalism really from our point of view, and we’ve prepared very well. It’s a quicker turn around now from this game than from what we’ve necessarily had before, but it’s a good place as I said before, that we’re in, and we’ve got to start fresh tomorrow and come start time.

Q. If you win and make it to the quarterfinals, could you just talk a bit about how crucial it will be for Ireland and also representing the associate teams? How would that pan out?
WILLIAM PORTERFIELD: Yeah, obviously, as I said before, firstly, that’s a tag I don’t like. I think associates, I don’t think teams should be associated any differently, and putting those tags on us. As far as I’m concerned, there is a ranking system in place and that’s where we’re at. As far as the publicity and the hype back home with the minutes right up there, you speak to people who are back home and the stories that you see coming out are great, and that’s where cricket is going in Ireland. So, hopefully, yeah, we do make those quarterfinals and keep pushing on as a country ourselves, and hopefully the ICC will take notice and we’ll start looking at the next World Cup. Obviously, cutting teams in the World Cup isn’t the way forward unless that’s the vision for the game. If but if you want to progress your game and grow the game of cricket, then cutting teams in world competitions isn’t the way forward.

Q. I know you guys reached last night, but do you have a starting lineup announced and are there any injury concerns at all?
WILLIAM PORTERFIELD: No, we don’t have a starting lineup as of yet. We’ve obviously just arrived in Hamilton last night. We’ve just arrived and grind here as well, so we haven’t looked at the pitch or anything. We haven’t gotten 11 as such. We have a nice warm merry welcome this morning down in Hamilton gardens, which was great. It was something different for ourselves and great to experience that as well when you come to different countries, get a bit of the culture as well.

Q. Is it an oversimplification to say that India’s strength is their batting and you may look to target their bowling as somewhere you can knock off a big store and put pressure on them there if you do bat first?
WILLIAM PORTERFIELD: If you bat first in any game, you’re looking to put that score on the board. It was a great task for ourselves. It wasn’t necessarily easy to start. The wicket would come in Hobart, and the tossing stuck in, and that was great for ourselves. That was the first time we’ve batted first in the competition, and to put a good total on the board was great. As I said, whatever we do first tomorrow, we have to start well, being the first ten overs with bat or ball and seeing how hard India came out after West Indies as well, so I don’t think they’ve necessarily got a weaker suit as such. But as I said, we’ve just got to start welltomorrow.

Q. As someone who has played a lot of 50 over cricket in your career, has there been a change in the way teams have gone about the gender tempo of the innings? That they’ve slowed down and cannot keep their wickets of 35 and go absolutely crazy in this World Cup for the last 10, 12 overs? Has that been a change? Do you think that’s come from 20 Twenty cricket or what are your thoughts about it? Teams are able to chase 300, 300 plus. It’s seen as big a deal as it was three, four years ago?
WILLIAM PORTERFIELD: Obviously, the real change has had an effect on how teams go about it, and they ran race in the last ten as well over the last couple years. I think Twenty20 has helped how teams go about it at the back end as well. Teams have scored 360 around the grounds and not just certain players, pretty much every batter can score 360. So that’s what’s crucial about trying to take wickets in those first 30 overs then that puts pressure on teams coming back on that back end. But as we’ve seen in this competition, if you don’t do that, you put a lot of pressure on yourself because it is very difficult to defend at times in those last 15s. So, I think obviously wickets is the best way to slow that down.

Q. Just a quick question. As the sort of follow-up question to that is that has it then changed the whole thing of after 30 overs you double your score and that’s what it is? Those numbers have completely gone out of the window?
WILLIAM PORTERFIELD: Oh, look, I think you can still do that. You can do it from 15 or the way things have gone. But it’s a big thing for any team. If you’ve got those wickets in hand, there is no real restriction on those last 10 or 15 overs. I think especially with the size of some of the grounds and how good the pitches are, you can score a lot of runs. So I don’t think it’s necessarily doubling your score here and there. I think it’s if you have those wickets in hand. Then if you have someone set at the crease, lads can come and strike at ball one, and you’re giving yourself every opportunity for a big score.

Q. India have already made the quarterfinals. Do you think they would go about things differently now that they have made the last and that would give you an advantage?
WILLIAM PORTERFIELD: I think what India does is entirely up to themselves. They’re obviously qualified, but I’m pretty sure they’ll be looking to get top spot in the group as well. I don’t expect them to come in any way lightly at ourselves, so we’ll be ready for that. But however they decide to go about things and whatever team they pick, that’s up to them.