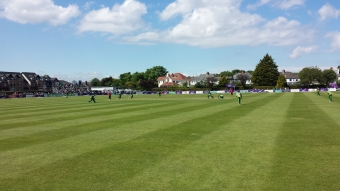 Early bird tickets available with a 20% discount on all tickets until March 31st. These great value packages see Family Tickets at just €49 for a full day’s entertainment in Clontarf and an Adult 2 Match Ticket Package at just €35.

WILLIAM PORTERFIELD is calling on his Ireland team to draw inspiration from Sri Lanka as they continue their quest to gain Test status from ICC.

Sri Lanka were granted Test status in 1981 after winning the 1979 ICC Trophy, and just 15 years later were crowned World Cup Champions. Since then they’ve finished runners up in both the 2007 and 2011 finals as well as winning the 2002 Champions Trophy.

They’ve also been successful in Twenty20 cricket reaching two global finals,  and are currently the number one ranked side in that format.

“You can’t help but marvel at just how successful they’ve been in the last 33 years since they became a Test nation, and they’re definitely an inspiration to all Associate sides,” said Ireland captain Porterfield. “I genuinely believe there’s the talent and potential in Ireland for us to become an established Full Member international side. You only have to look at the growth in participation and popularity of the game throughout the country in the last seven years to see how it’s taken off.

“It’s fantastic that the Sri Lankans are coming to Dublin and it’ll be a great opportunity for fans of both sides to see some of the world’s top players in the flesh. The Dublin crowd is always superb, and always get behind the team - they’re definitely our 12th man on these big match occasions.

“I’ve played against Sri Lanka twice - in the 2007 World Cup and in the T20 at Lord’s in 2009. We lost heavily in Grenada but it was still a wonderful experience to play against the like of Muralitharan and Vaas. We came really close to pulling off a shock in the match at Lord’s when we lost by nine runs, and probably should have won it. Alex Cusack bowled superbly to take four wickets and we were well placed at the half-way stage before faltering. Our inexperience showed that day - I’m convinced that if we were in the same situation now, we would finish it off.”

Sri Lankan captain Angleo Matthews was anticipating a hard fought contest saying: “We are very much looking forward to travelling to Ireland for the two match One Day International Series in Dublin this May. We have seen Ireland’s progress on the world stage and there is no doubt they will be formidable opponents especially in their home conditions. It will be the first time that most of us have ever been to Ireland and we certainly anticipate a challenging series with plenty of good cricket.”

Clontarf is the venue for the RSA Insurance ODI Series between the teams, with the Castle Avenue venue hosting both fixtures which will take place on Tuesday May 6 and Thursday May 8 (10:45am start).

The picturesque Dublin venue is renowned for its great atmosphere, and it was the perfect host for the thrilling series between Ireland and Pakistan last year where the Boys in Green so nearly claimed a famous series victory. The 2013 RSA Insurance Series, also in May last year, saw record crowds flock to Clontarf with over 5,500 attending over the two matches and the second game being a complete sell out.

Cricket Ireland Marketing Manager Andrew Leonard advised fans to get their tickets early. ‘Following their popularity last year, Cricket Ireland are delighted to be repeating the Early Bird Specials which offer a 20% discount for all match tickets purchased before March 31st. We saw last year at Malahide and Clontarf cricket fans supporting both sides in superb numbers and I’ve no doubt there will be a carnival atmosphere again in Clontarf at the start of May as the stars from Sri Lanka come to take on our treble winning heroes who will be fresh from the ICC World Twenty 20 in Bangladesh.’

The ‘Early Bird’ specials which offer a 20% discount for any match tickets purchased on Ticketmaster before March 31st - that would mean an adult ticket being priced at just €20, and a youth ticket €8.

There are also discounts for a bundled two-match package, with an adult being able to see both games for a great value €35, Under 16’s just €12, and a family package (two adults, two kids) being priced at only €89. The two match package will only be available until March 31st.

The ticket prices are as follows:

Further details can be found by clicking here.