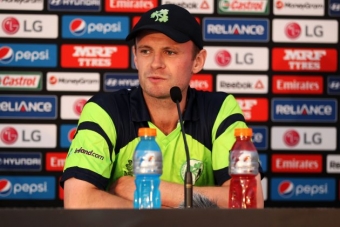 Speaking to the media, Ireland captain William Porterfield says his side is raring to go ahead of their World Cup match against the UAE on Wednesday.

Q. You have a long wait for your second match. The team raring to go again?
WILLIAM PORTERFIELD: Yeah, it has been. It’s been nine days between games it can be quite a long time. But, as I said, the lads are raring to go. We’ve had a good few days training, so top up session this afternoon, and a bit under lights and we’ll be good to go.

Q. While you’re used to playing the UAE, 13 games unbeaten. Any problems tomorrow?
WILLIAM PORTERFIELD: It’s obviously a decent record, but it doesn’t account for anything. In any game you’ve got 11 on 11 and two horse races. It’s anyone’s game. Obviously, if we go in there and play the kind of cricket we want to play, then I’ll be happy, and the result can go from there.

Q. Obviously, your first side The Gabba. Impressive stadium isn’t it?
WILLIAM PORTERFIELD: Yeah, it is. It took us 15 minutes to get here and find the media center, but it’s a pretty impressive stadium, and can’t wait to get out there and play tomorrow.

Q. Playing here, very different from where you played the West Indies. Is this a ground do you think will kind of lift everyone and be an inspiration in itself?
WILLIAM PORTERFIELD: Yeah, quite a few lads were here in October, and we had a training camp out here, but a few lads arrived out later, so a few of us haven’t been here. It just inspires you when you walk into a stadium such as this. It’s a fantastic venue. You’ve got everything here, and if it doesn’t inspire you to play and go out there and enjoy it, then I think there’s something wrong.

Q. Quite a lot obviously to play cricket-wise, but the way the results have gone so far, do you see it almost as a toss-up between yourself and Pakistan to make that final qualifying place?
WILLIAM PORTERFIELD: I think, as you said, there is a long way to go. We’ve played one game of cricket. We’ve got five to go. So it’s not something we really want to look at too much before the West Indies game. We’ll just focus two points on that. I don’t think it’s any different as far as tomorrow goes and we’ll take it from there.

Q. William, just further on, one thing that’s happened in that vacuum because you beat the West Indies, there is externally a little bit of expectation that you’re going to have a good tournament. Do you try to sort of firewall the team from that kind of thing?
WILLIAM PORTERFIELD: No, not really. We’ve spoken openly about wanting to make the quarter-final. At least, that’s our first goal. We’ve come here and expecting to get through the group. Internally as a squad, it’s something we’ve spoken about and something we want to do. So, obviously, winning each game or taking each game as it comes is one of those processes. Starting again, we’re going to have to do that tomorrow. We can’t expect to pick up where we left off against the West Indies. I think it would be foolish to do that. So we’ve got to prepare well as we have done again, and have a look at the UAE, we’ve done analysis on them. It’s just that we’re starting fresh again tomorrow and going out there and trying to get the two points.

Q. Just on the water issue that’s going around. A lot about the format of the World Cup, this one and the next one. Do you think every game that you play well is, I suppose, an advertisement for keeping it as broad as possible and allowing teams to progress?
WILLIAM PORTERFIELD: Yeah, definitely. I think it’s frustrating whenever you come to tournaments and the governing body wants to keep cutting teams. I think it’s the only sport in the world that does that when it comes to world events. You have your Champions Trophy every couple years and that’s with the top eight teams. And it wouldn’t be a World Cup if you just keep reducing teams and having only the top few teams that are ranked. So it’s very disappointing and frustrating from our point of view that that’s the way ICC is viewing things or that’s the way they want things to be. Hopefully we can keep improving performances. Obviously, Afghanistan could have come out against Sri Lanka and Scotland have done reasonably well as well. The lost wickets against New Zealand in the first game, and the way the UAE played against Zimbabwe as well posting 285, things could have gone quite differently if it wasn’t for Irvine and Williams at the end. So the way the four teams have qualified have performed so far in this competition has been great. We’ve got to keep that going, not only ourselves, but everyone else. It’s great to see so many people that have gotten behind that. It is a global event, and it’s a sport we want to grow and you’re only going to grow that if you have more teams participating around the world.

Q. Have you guys signed the petition that’s going around?
WILLIAM PORTERFIELD: I just noticed a couple things this morning. That it was retweeted and a couple things were mentioned. As I said, that’s great to see. But from our own point of view, we still have to put performances in on the pitch. So that starts with us tomorrow. But obviously the more people that can get behind that, hopefully things can change. It’s not just a case of narrowing down the teams, but it’s a case of expanding the game.

Q. William, the fact that the majority of players on your team have been playing together for eight years since the 2007 World Cup, and also the fact that a lot of you up link on to cricket in England. How much of that experience is helping you gel as a unit in World Cup?
WILLIAM PORTERFIELD: Yeah, it’s obviously great as you said. We have quite a few lads coming through since ‘07. We have quite a few lads, I think there are 6 lads on the squad that this is their first 50 of a World Cup as well. So the mixture of youth and experience is great. A lot of young lads coming into the squad are approaching the senior lads as well for places, and that competition is great. That creates a good environment within the squad. So I think it is good how close a bond we have on and off the pitch. And that’s something we need to continue and have, and it helps you enjoy cricket.

Q. Just to the earlier question, do you think the current format of the World Cup is right then because there have been suggestions, obviously, it’s too long. It goes for six or seven weeks. How do you sort of fit in, I suppose, the demand for a shorter or sort of southern off tournament with you guys and the other associates sort of applying as well? Or does it need to be shorter? Is it fine at the moment?
WILLIAM PORTERFIELD: Well, 52 weeks a year, four years in between, that’s a lot of weeks. So you have over 200 weeks, and for six or seven weeks, you think that’s a short tournament. Everyone ease got their own opinion on that. It’s a world event that happens once every four years. You see football teams, it’s a major global event. Just to shorten it down, you have a Champions Trophy every couple of years. I personally don’t think it’s that bad. But you have to look to expand the game. Look at Sri Lanka now. You have competition, and you want them 20 years after, 21 years after. I just don’t think it’s right the way things are running. As I said six or seven weeks out of 300-odd isn’t a long time.

Q. Is some of the problem going into a World Cup that the associate nations don’t get enough cricket against the top nations as well, so possibly perhaps not yourselves, but certainly some of the other associate nations may not be prepared almost because they don’t play enough cricket anyway because the top nations?
WILLIAM PORTERFIELD: Well, I would say we’ve played nine ODIs against the top eight teams in the last four years. That’s not a lot of cricket. We’re playing two games a year against top nations, so if you want the game to expand, you have to talk about preparation. In terms of games, we haven’t been prepared. We’ve only played six games in this World Cup as a group stage minimum, and we’ve played nine in the last four years. That’s not acceptable. It’s not what we want. It’s not what developing the game is about. If you add up the amount of games the four teams have qualified, I wouldn’t think it’s a lot. We’d be struggling to touch on 20, and teams are playing 20, 25 plus a year within that. So that’s a big difference in fixtures over four years between competitions.

Q. William, as someone who has seen and played a lot against UAE, what kind of progression have you seen in them, especially in these last seven, eight months? Also, you have played a lot of matches against them in the UAE. The conditions out here and you’ve won most of them or all of them. So the conditions out here, how different will it be and how much of it is advantage Ireland because of that?
WILLIAM PORTERFIELD: Yeah, I think one of the things throughout this competition in general is you’re going to have to adjust from venue to venue. We’ve come from Nelson, and we’re all here to gather generally historically because we want to pay some points on the wicket and a bit of movement there. So we have to adjust to that going from venue to venue as well. Obviously, we’ve played the UAE a fair bit over the past number of years. It’s still been almost two years we’ve played them in the qualifier as far as competition. And the strides we’ve made from then obviously qualifying, over the last seven, eight months per year. As we said, the performances they’ve put in gelled well as a team, they’ve got a good system, working well for themselves, and I expect a very tough game tomorrow.