Porterfield talks about the toss, death overs and Kevin O’Brien 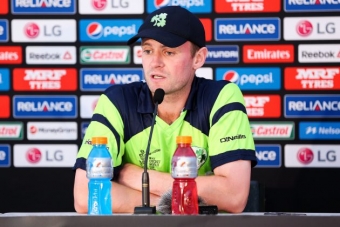 Ireland captain William Porterfield speaks to the media following Ireland’s win over the UAE at the Gabba today.

Q. William, talk about the match.
WILLIAM PORTERFIELD: I think the first 20 overs, 30 overs of Ireland’s, I was taking 130 for 6. It was a great effort there, and where we really wanted was for the last 20 overs, the impetus we had there with the bat. In this format a game can make its way to the back end is pretty crucial, and I was in the bounce. Obviously we were four down at that stage, but the way obviously Wilson and Kevin got that impetus back in the innings it was great, and then from then on, obviously you were still chasing quite a few an over, but the game is always within your reach or in your control to a fair extent if you’ve got those wickets in hand, and it’s very hard to defend coming down the back end, and we proved that in the end.

Q. What about the toss? Would it have been easier to bat first, under the lights in the end?
WILLIAM PORTERFIELD: Yeah, there’s a lot of pros and cons for either. We could have batted first and made first use of it. To be honest I didn’t think ‑‑ it did slow up slightly toward the second innings, which I didn’t really expect, but I was quite happy with 130 for 6 at that stage. Obviously it can make a season all day. Literally that’s the first time going out there and had a toss up.

Q. Would you have preferred chasing obviously?
WILLIAM PORTERFIELD: Yeah, one of the things this way, as well, was it’s very hard to defend coming down the back end, and if we can utilise whatever swing it there is up front and not put an extra bounce, it’s different conditions, as well for the UAE. We can put them on their back foot and put them under pressure and take wickets, which we did do to a large extent, being 130 for 6. Then that justified it, and we got them in that position, and then coming down near the back end, I thought it was a big ground and was going to be very hard to defend on, especially the rules the last couple years, four men up, it is very hard to defend. That’s what did the swing in the end. On an all‑day you could bat first on that and get a big total if you bat well, but that’s what swung me really was hopefully taking early wickets, which we did, and would be to start easier, very hard to defend coming down near the back end, which it proved to be.

Q. The last 15 overs, obviously you went for about 150 runs. Was there a change of plans? Why so many short balls in the last 15 overs?
WILLIAM PORTERFIELD: I don’t know, it’s a massive ground scoring a wicket. You want to try and get teams hitting the bigger boundaries if you can in any format. We didn’t get it 100 percent right. A few of the plans, as well, we can maybe look at, but it is a very difficult time of the game. When you have a team 130 for 6 it is slightly disappointing to come off the way they did, but you’ve got to give them a lot of credit the way they struck the ball and the way they played. I think UAE have been fantastic over the last 12 months as I said yesterday before the game, the way they’ve kicked on, how they’ve played their cricket, and they’ve been getting scores like that on a regular basis and they’ve done it against Zimbabwe and they’ve done it against ourselves when they’ve back on the back foot, so I think you’ve got to give credit to the way they played.

Q. At halfway you thought that was a gettable total obviously?
WILLIAM PORTERFIELD: Yeah, we thought it was about par when we came off, and we obviously knew being a big pitch it was going to be very hard to defend on.

Q. William, what’s it about Kevin O’Brien and World Cups? We see at every World Cup the stunning knocks. What happens to him?
WILLIAM PORTERFIELD: You’d see a bit more often if we had more games. It’s pretty much the way it is, like we play every four years on the big games and such, and if we played a few more in between you’d see it a bit more often. We see it every day in training.

Q. William, the last 15 overs, the death bowling, are you resigned to the fact that the playing conditions are such that you really can’t do much about it?
WILLIAM PORTERFIELD: No, I think you can never be resigned to it. I think obviously looking at the game nowadays, Scotland‑England were 170 for nine after 30 and they were six under 300 with 10 wickets in hand, 20 wickets to go. It’s doable, but it is very difficult at this stage of the game where you’ve got to be taking wickets throughout the first period building up to that, and I think taking wickets is obviously ‑‑ it’s pretty simple that the best are restricting teams to lower totals. You’ve got to be looking to do that. I think you can probably take wickets throughout the innings and it is difficult coming down near the back end, but I think you can obviously be smart about how you go about it.

Q. William, Gary alluded to it before, but point of pride that it’s two associate nations that have put on the closest match and the best finish of the tournament so far?
WILLIAM PORTERFIELD: Yeah, as he said, as well, it was closer than we would have wanted, but if you give me two points any day of the week, you’re taking them. As I said, a lot of people said building up to this game how comfortably we should win it or how comfortably things have happened. We never thought that for one minute how we have been going, and that’s great to see. Yeah, two associate nations going head to head, it’s great. We put on a good show, and obviously thank the Irish fans. There’s a lot of people that arrived from Ireland over the last couple of days in the buildup to this game and throughout the rest of the group stages, but there’s 5,000, 6,000 in there tonight, and we heard the voices there.

Q. Just finally on selection, another big call leaving Andy out after his great performance in the first match. Any regrets about that?
WILLIAM PORTERFIELD: It’s difficult. Generally games we’ve played against UAE we haven’t bowled as many overs as we have necessarily in our games. It’s just the way we’ve gone; where we’ve been here in the Gabba in general, there’s been more bounce and stuff, so we just wanted that extra seam option with him at four and two, so obviously Stirling stood up and bowled really well today and Dockrell didn’t really get a chance like I think he potentially could have on another day, but that’s just the way things panned out, and I was quite happy having the extra seam option today.

Q. There was a lot of euphoria after the win over the Windies and a lot of nerves today getting towards the end. Which of those games do you think sets you up better for the rest of the tournament?
WILLIAM PORTERFIELD: Either or. A win is a win. Like you said, there was a lot of euphoria over the West Indies game, and that was great. But within the games, it’s some of the best feelings I’ve had in terms of it’s cool, calm, collected feeling right throughout the chase, and that’s what we were after and how we play our cricket, and we were still out there in the last 20 overs today, even though the rate was getting up over 10s at one point or getting close to 10s. That’s a great feeling to have within the change rooms, that you’ve got 100 percent backing from in there, and lads are calling what’s going to happen before it happens on the pitch, and that’s a great place to be in my opinion, for a dressing room to be. I’m happy with both wins and how we’ve gone about them.