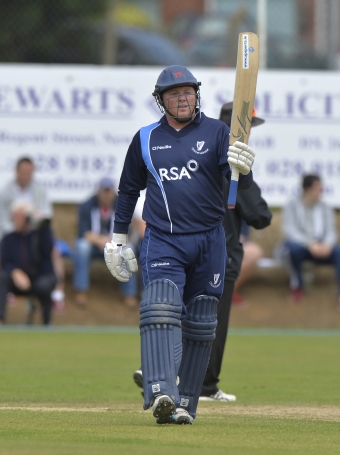 Andrew Poynter scored an unbeaten 123 to lead Leinster Lightning to a 47 run win against Northern Knights and seal the Newstalk Inter-Provincial Cup at The Lawn in Waringstown on Sunday.

The Clontarf batsman has been in prolific form this campaign, scoring over 1000 runs domestically, and he dominated the NCU attack hitting 9 fours and 6 sixes in his 123 not out from just 111 balls.

Leinster’s total of 254 for 9 was a lot more than seemed feasible after they had been struggling on 59 for 4 early on.

It looked as if it mightn’t be enough though as Knights openers Chris Dougherty (35) and Nigel Jones (27) put on 62 for the first wicket in just 52 deliveries before Tyrone Kane got the breakthrough.

Albert van der Merwe (2-21) bowled tidily, and despite cameos from Lee Nelson (33) and James McCollum (37*) - both playing on their home turf, the Knights fell 47 runs short.

YMCA spinner Yaqoob Ali (2-43) bounced back well from a nervous start to wrap up proceedings by dismissing Stephen Bunting and Phil Eaglestone.

The final game in the series takes place at Rathmines next Saturday, when the same teams will be in opposition.