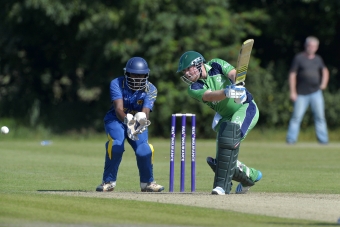 The Durham wicket-keeper batsman scored a quite brilliant 109 from just 88 balls (11 fours, 2 sixes) as Ireland finished on 255 all out chasing Sri Lanka A’s total of 283.

Poynter shepherded the tail quite magnificently, sharing stands of 61 with Craig Young (26), and 87 with Peter Chase (22*), after Ireland had been reduced to 107 for 7.

It was in effect 107 for 8, with Eddie Richardson hors de combat after being struck by a Dushmantha Chameera bouncer.

Ireland gave first caps to Peter Chase, Chris Dougherty and Nick Larkin, while at the other end of the spectrum, Andrew White was given the honour of leading the team onto the field on the occasion of becoming Ireland’s most capped player - finally overhauling Kyle McCallan’s 226 appearances. Overwhelmed by all the messages today. Much appreciated and thankyou. Great to share the day with guys earning their first caps. #honoured

White bowled steadily to claim 2 for 42, but it was Richardson who took the bowling honours, claiming 5 for 61 to peg Sri Lanka back to 283 when they seemed on course for a total in excess of 300.

Mahela Udawatta (88) and Danushka Gunatilleke (57) shared a second wicket stand of 106, after Craig Young (2-62) had trapped Kusal Perera in the first over of the day. Chtahuranga de Silva (43), Sacith Pathirana (23) and Ashan Priyanjana (21) all batted steadily for the tourists, but Ireland will have pleased with their fightback to dismiss them for 283 - Andrew McBrine’s safe hands claiming five catches in the outfield.

The air of despondency at Ireland’s collapse was lifted by Poynter’s late innings heroics, which entertained the large Stormont crowd who basked in glorious sunshine for most of the day.

The teams meet again at the same venue on Friday (10:45am), before the final game at Coleraine on Sunday. Massive congrats to @Whitey631 on becoming Ireland's most capped player..serious effort, skill and commitment over a long period of time..