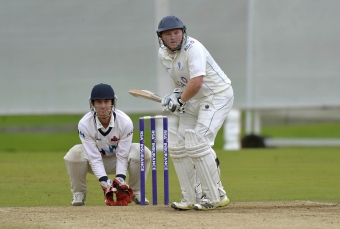 Andrew Poynter will skipper the Ireland A squad which will take on the MCC at Malahide next month.

The Clontarf batsman has been in prolific form at both domestic and Inter-Provincial level, scoring half centuries in each innings as Leinster Lightning defeated Northern Knights last week.

Poynter is one of seven players capped at senior level in a very strong Ireland A line-up, with John Anderson, Andrew Balbirnie, Andrew McBrine, Eddie Richardson, Stuart Thompson and Craig Young the others.

The North Down pair of James Cameron-Dow and Nick Larkin have also been included. Left-arm spinner Cameron-Dow impressed in his performances on tour with the A squad in Sri Lanka earlier this year, while team-mate Larkin scored a double century opening the batting for the Knights against Leinster Lightning last season.

Malahide speedster Peter Chase will be playing in front of his home fans. The 20 year-old is currently playing for Durham Seconds against MCCYC, taking 2-35 in 15 overs during the first innings of the game.

“The selectors have chosen a nice blend of youth and experience,” said Ireland coach Phil Simmons. “It’s a great opportunity for those selected to showcase their talent against tough opposition.

“Andrew Poynter has been in great form since the end of last season, and been incredibly consistent in all competitions this season. Andrew Balbirnie has scored a lot of runs in England, while Craig Young is the leading wicket taker in the North West.

“There’s a first opportunity at this level for Nick Larkin who looked impressive when I watched him last week. The players are all working hard as they know there are World Cup places up for grabs. It’s a chance of a lifetime for the guys and they all naturally want to be a part of it.”

Action at Malahide gets under way at 10:30 am on Friday July 11, and admission is free.

In a change of venue, Malahide will also host the Newstalk IP Championship game between Leinster Lightning and North West Warriors next week - July 1-3. Action in the three day game will start at each day at 11am and admission is free. Live scoring will be available on www.cricketireland.ie