Poynter to skipper Ireland against Sri Lanka A 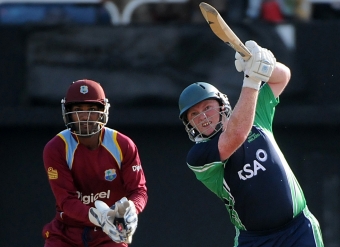 Andrew Poynter will skipper Ireland for the first time in the series against Sri Lanka A which gets under way in Belfast next week.

The Clontarf batsman has been in prolific form this past 12 months, and successfully captained the Ireland A squad in the 10 wicket win at Malahide against the MCC last Friday.

It’s a real family affair for Poynter, who will have his younger brother Stuart keeping wicket, having been released by Durham to play in the games.

There are four uncapped players in the 14 man squad, with opening bowler Peter Chase, batsmen Nick Larkin and Chris Dougherty, and all-rounder Barry McCarthy hoping to make their senior debuts against the Sri Lankans.

At the other end of the spectrum, Instonians all-rounder Andrew White will be hoping to become Ireland’s most capped player, having been level with Kyle McCallan on 226 caps since his last appearance in the InterContinental Cup final win against Afghanistan last December.

Gloucestershire seamer Graeme McCarter will play in the first game next Wednesday, before returning to play for his county. He will be replaced by Pembroke’s Barry McCarthy for the last two matches.

“The selectors have taken the opportunity to get a look at some new faces against quality opposition,” said Ireland coach Phil Simmons. “It’s a great chance for these guys to show their abilities against a very strong Sri Lanka A side.

“There are obviously World Cup places up for grabs, so it’s an important series for the players to state their case and grab their chance. They’ve all been performing well with their clubs, but need to show us they can do it at the higher level.”

Ireland take on the Sri Lankans at Stormont on Wednesday July 23 and Friday July 25, before finishing the three match series at Coleraine on Sunday July 27.

Admission to all the games is free, with play on all three days getting under way at 10:45am.

* note: Graeme McCarter only playing game on 23rd July, and will be replaced by Barry McCarthy for matches on 25th and 27th July.